How to use it

This is great news!

Its not exporting the scene (.fire) inside folders and sub folders. First I assumed the plugin is not working and found this problem.

What’s your path of your .fire? Is there any problem if you put it in assets?

If I move to assets it exports fine.

Thanks for the information. I will fix it ASAP. And you can create an issue in the github repo in future.

zhangxm: Did you use the plugin to build again?
----> yes, im only using the plugin.

yaaashua:
update: LOL, I even deleted the scenes and still appear in the exported data hahaha. Ill try the alpha0 now

zhangxm: What did you mean? You tried another version?
—> no, I mean I deleted from the cocosCreator the scenes that were creating problems, created a new scene, and after building the data (exporting using the plugin) the new scene was not exported, but the most interesting part is that the scenes that I previously deleted were actually exported by the plugin.
after some moment, seems like the exported data doesnt change, no matter how much you changes the scene.

as I mentioned, I found out how to reproduce this error:

-I just took everything from the example project and put it inside a folder “example”
-I created a new scene. As long as this scene does NOT use any of the contents of the “example” folder, everything is fine, but as soon as I place one sprite into the new scene… build script fails , and data is not exported.

Maybe is related to what @nicardo said, because it happened after moving things into a different folder,

@yaaashua yep, it has problem if .fire is in subfolder.
@OscarLeif what did you mean prebuild. It is not cocos2d-x.

Is there any C++ method for instantiate a prefab?

Currently not, and i am not sure if it is possible. This plugin will support as more features of creator as possible, but can not support all features.

I experience some errors:
using the alpha0 project I created a scene, to use it in C++, after creating a RichText (i think thats the source of problems) and save it, the plugin fails trying to export.
I deleted the scene, since didnt know what from my scene was creating the error, but the error remains. So all I have is the alpha0 example project and is failing.

I check the files difference against the repository, and all I can see is there are some files created from my already deleted scene ( from folders: /ccreator , /json/ , temp/BackupAssets/assets/). I deleted this files hoping that this helps, but no.

(note: everything was in the same folder, I didnt create any subdirectory)

what I mean is this.
In order to have prebuild we should first setup the projects after we created, because this is not by default, I think changing that can save a lot of time and space in the hard drives.Well of course I don’t really know if changing this is easy or nor, of course I talk for the C++ version of the engine.
I will check if this new version of cocos creator 1.5 is more faster to develop (I receive an email talking about a release of Cocos Creator 1.5 and Cocos2d-x 3.15)

btw: I think label size (dimensions in C++) are missing when exported.

@yaaashua as the readme and log says, RichText is not completed.

I deleted the scene, since didnt know what from my scene was creating the error, but the error remains. So all I have is the alpha0 example project and is failing.

I check the files difference against the repository, and all I can see is there are some files created from my already deleted scene ( from folders: /ccreator , /json/ , temp/BackupAssets/assets/). I deleted this files hoping that this helps, but no.

They are two different issues, right? I don’t quite understand the issue. Could you please describe it how to reproduce it step by step? Thanks.

btw: I think label size (dimensions in C++) are missing when exported.

Could you please show me the wrong result or show me how to reproduce it?
Thanks.

@OscarLeif i think the engine used in cocos creator is binary by default, i am not sure. But the plugin is for cocos2d-x, could you please ask questions in creator category?

@zhangxm how to reproduce it? Im not exactly sure. All I did was:

—> and at this point… something went wrong and I could NOT export anymore…
—> then I deleted the scene (I didnt clear the scene, I removed the scene.fire) but still I was unable to export. I was screwed up with that project after that point. Script would always send error.

label size (dimensions in C++) are missing when exported

this is how I set up the label: 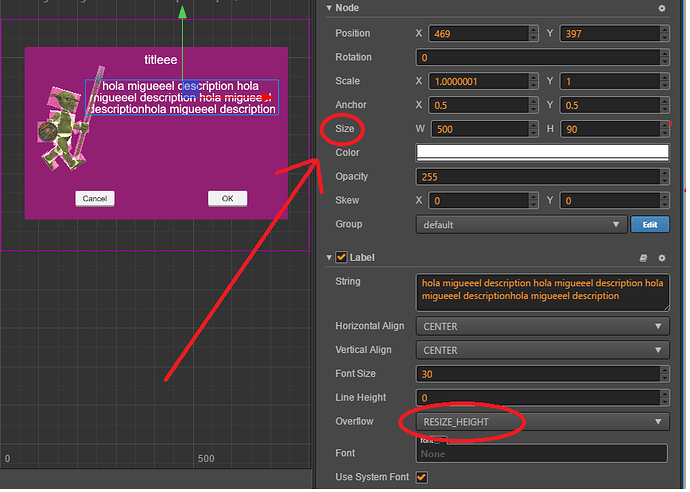 and this is the result: 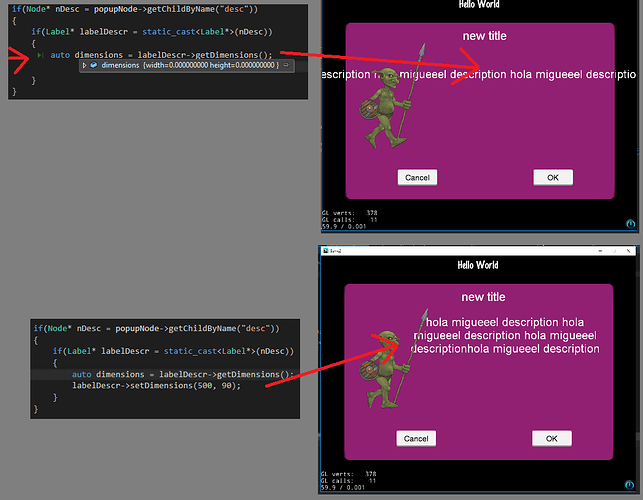 Thanks, i will try to reproduce it first.

Is it possible to have some documentation ??
I struggled last 2 hrs finding out that the hierarchy in cocoscreator is not the same that the nodes in C++

I know documentation is not the priority right now, and all of these diference can be found out by the programmer in a few days >_> but… really, it would be nice to be aware of all these diferences.
tnx