Note: This article is based on Cocos Creator 2.1.2 version

Note: You can reference to this demo project

Introduction and why are there performance problems

The ScrollView component of Cocos Creator is a common component in game development. It is often used in game interfaces, like ranking interface, task list, package system and other modules. However, it can suffer from performance issues. When needing to display many items, performance can be a blocker because Cocos Creator only implements the most basic features of scrolling. Developers to do some optimization depending on their usage situation.
ScrollView can suffer from these performance issues：

For example, this interface suffers from performance issues: 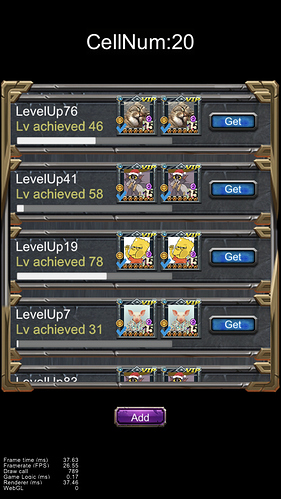 The ScrollView component in this scene has 20 cells，the total DrawCall has reached 790. A single cell has about 50 child-nodes, and in total about 1000 Node objects in this interface. Can you see why performance is an issue?

First, let’s do some general optimizations to help gain some performance. 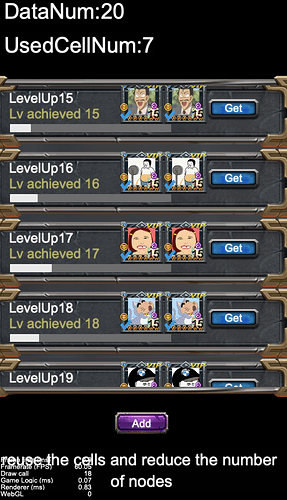 We use only 7 cell nodes to achieve a list of 20 cells, the number of DrawCalls is down to 18, and the actual number of nodes used is about 300, much less than the 1000 we started out with. If you take into account some of these common ScrollView optimizations it can greatly improve the performance of your game.

Thank you for reading!

That’s what I’m talking about.

Kudos for the wonderful informative article!!

Really need similar articles over the time to be accessible on cocos docs section somewhere.

Really need similar articles over the time to be accessible on cocos docs section somewhere.

I think so as well and I’ll see what we can do.

Solution for c++ . I tested it ! Hope this solution help you ! If you have a better solution , please leave a comment below !