ShaderEditor can only be found in the Chinese Cocos Store Section since
I do not have enough time to translate all the stuffs into English yet, it contains way too much features which may taken quite a long time to get it done and I am not sure if there are enough users interested in it or not.

SSRShaderGallery is much lighter and more simple to use compared to ShaderEditor which allows the users to browse Online Shader FX (over 100) listed in the Gallery as well as Testing them at realtime and Export the shaders in a format that can be used directly in Cocos Creator.

Let me introduce all the key features in SSRShaderGallery in detail in the following sections.

And here are some videos on how to use ShaderGallery you may check out first. (日本語の字幕も付き): 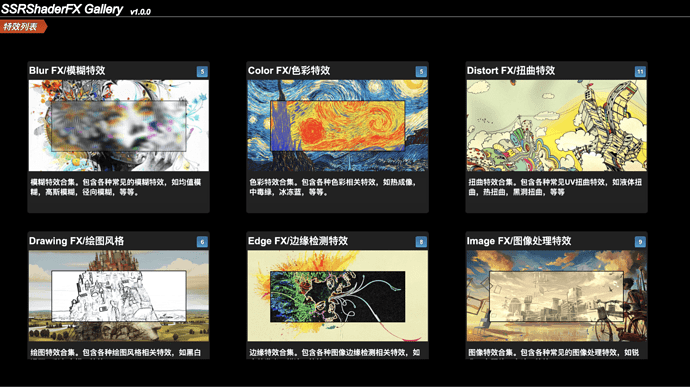 All the Shader FX listed in Gallery are divided into different groups that have same Theme so that the users can find the Shader FX they may need quickly. 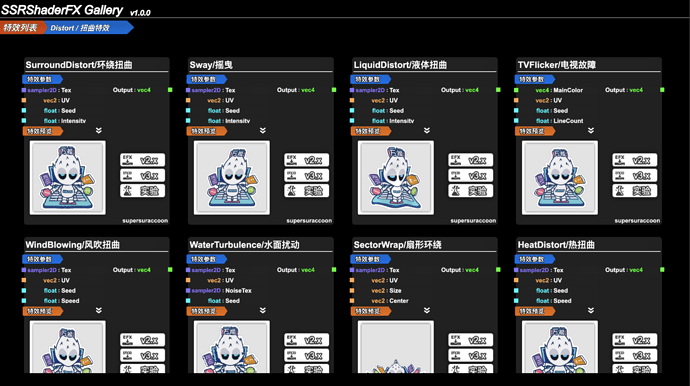 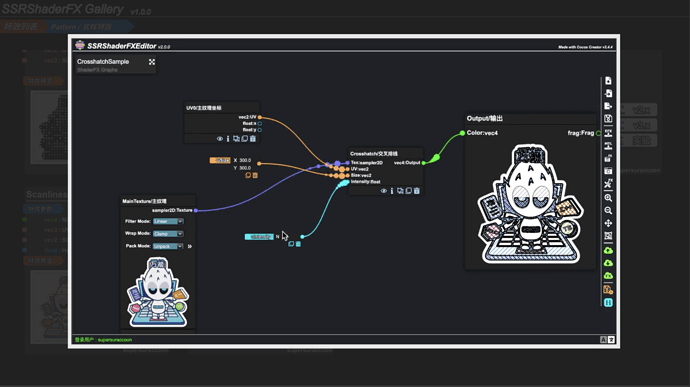 After entering a centain Shader FX Thema the users can find all the Shader FX related listed here with Uniform Input Paras and FX Capture and FX video preiview which will help the users to decide which Shader FX to pick for their game.

All the Shader FX by now can be watched here: 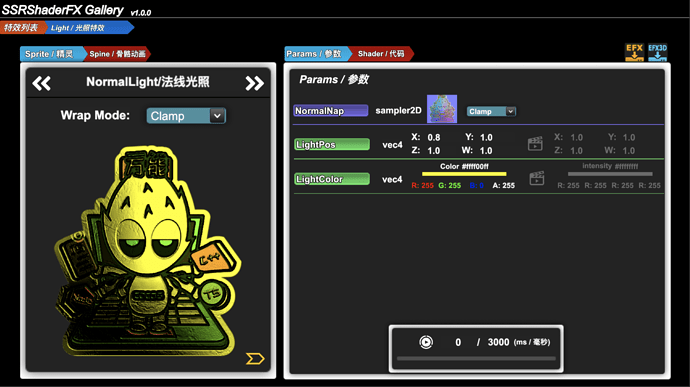 Knowing which Shader FX to pick to use is just the very first step. ShaderGallery also allows the users to preview all the Shader FX at runtime so they can have a more intuitive understanding on the Shader FX they pick. 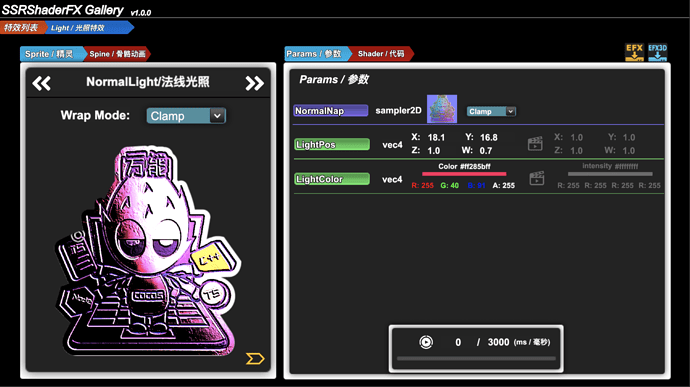 All the Uniforms of the Selected Shader will be listed here and the users can Modify these values and check the output of the Shader FX at realtime.

With ShaderGallery the user can not only previe the Shader FX with render target of cc.Sprite but also with Spine Animation.

Some UV-related Shader FX may not have the same output as with cc.Sprite so previewing the Shader FX with Spine Animation here is quite a huge feature.

To make UV-related Shader FX can work with Spine Animation you might need to take advantage of the cc.RenderTexture in Cocos Creator and you can also check another plugin I made here 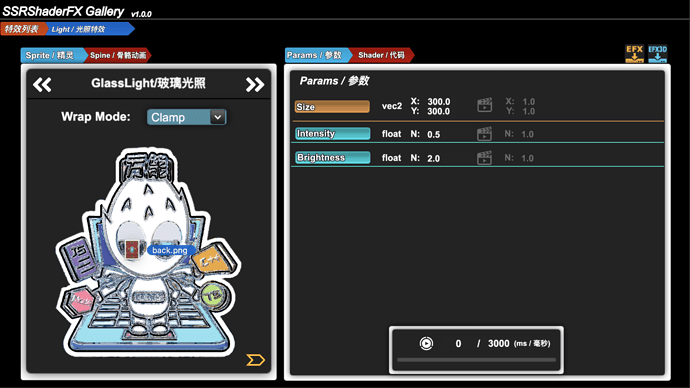 You can simply drag-and-drop the textures you want to preview to the panel to change the Image in preview and of course Spine Animation is also supported for drag-and-drop (you need to provide .json + .png + .atlas at the same time)

What’s more, there are also some built-in cc.Sprite and Spine Animation in ShaderGallery for the users to have a quick Shader FX test. 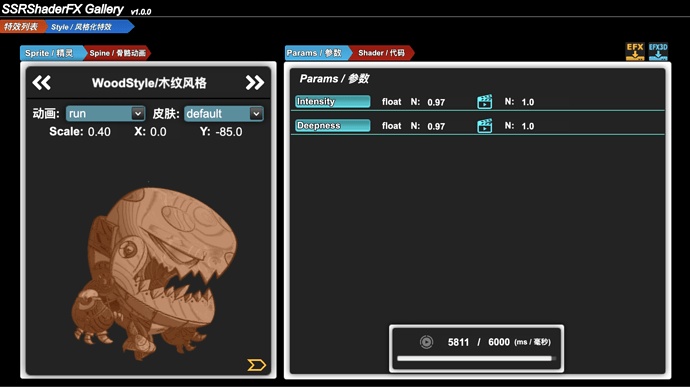 Most of the Shader FX are Static that might be a little bit boring as a matter of fact with the help of the cc.Tween built-in system in Cocos Creator we can make any Static FX into a Dynamic one.

ShaderGallery allows the user make almost any Uniforms into a Animated Value and preview it at realtime as well. 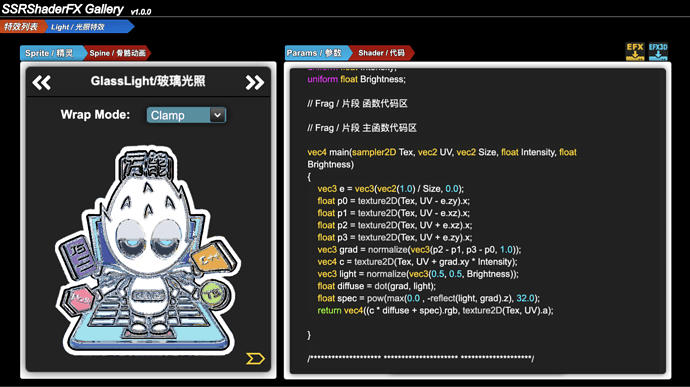 Besides the preview feature the users can also browse the Shader Codes of the current Shader FX they are working on this may help those who want to discover the magic under the hood. 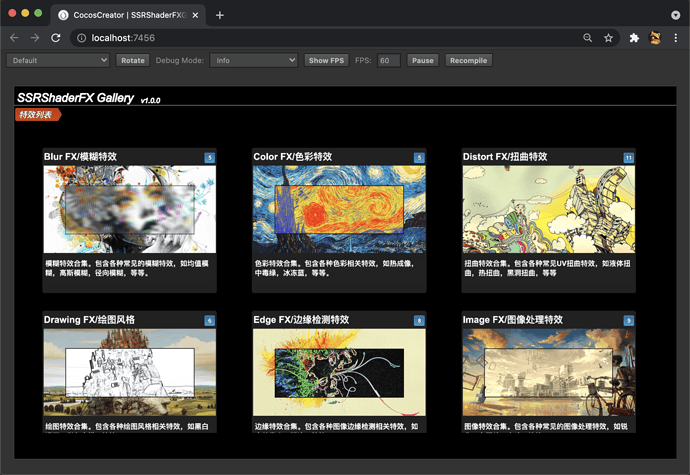 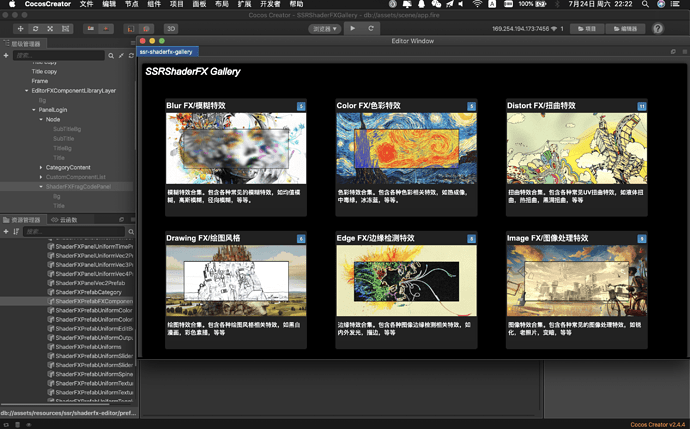 ShaderGallery can be used in the following ways: 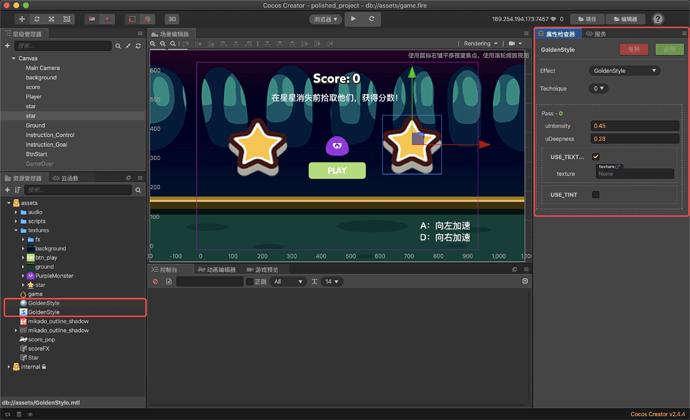 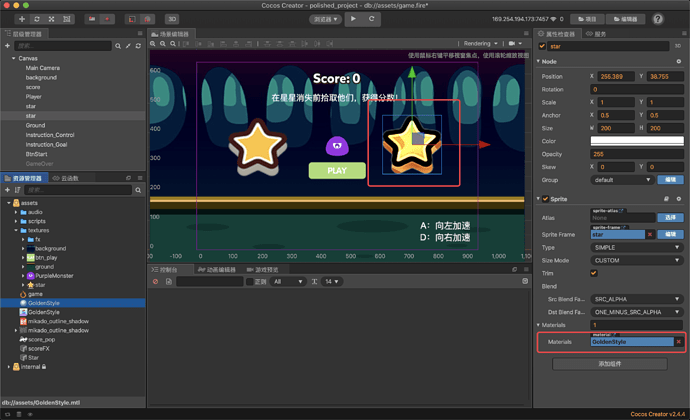 After testing and adjusting the Shader FX the users can export the FX so that they can be used in their game.

will export .effect + .mtl directly into Cocos Creator assets folder and the .effect + .mtl will be automaticlly bind so the user can use them without any setup process

Export FX is not supported yet

Will export only .effect file which is based on the builtin-unlit.effect which can be used in Cocos Creator v3.x ( users need to create a material file and bind it with the exported effect file manually )

Export FX is not supported yet

Most of the expoted Shader FX will be used in game and quite an amount of them are native game ( Android / iOS ).

Therefore, being able to preview all the Shader FX in Native enviroument will be a very nice feature for this plugin as we all know that some Shader FX might act differenty in web and Native environment.

ShaderGallery plugin will serve a native app ( .apk / .ipa) which can be used in your mobile device and with almost all the features memtioned above ( except the drag-and-drop feature since it relies on the Wev Browser Event ).

This feature is still under development ( 90% is done ) and will be released after it is completely done and well tested.

This plugin supports 3d version which only means :

SSRShaderEditor has been developed over the past 4+ years :

And SSRShaderGallery is also one of the projects that I really want to take it to the perfection.

Hope you all will like it and support it (there are still lots of cool features to come) .

Please feel free to contact me if you have any questions or suggestion.

The next release will be even better ~~~

Thanks for your support and I have sent the account information to your email, please check your mailbox

Thanks! I was able to successfully log in and reset the password. Let me know once you’ll release the ShaderEditor ( if that’ll ever happen ). That one seems to be a much more powerful tool. 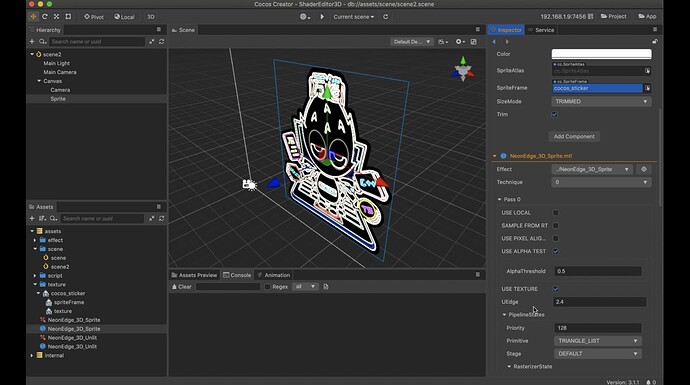 The upcoming update is under development :

Now you can preview the Shader FX in Cocos Creator Scene with selected Render Target so that you can know what the Shader FX you choose will affect your game without having to compile and run you game. 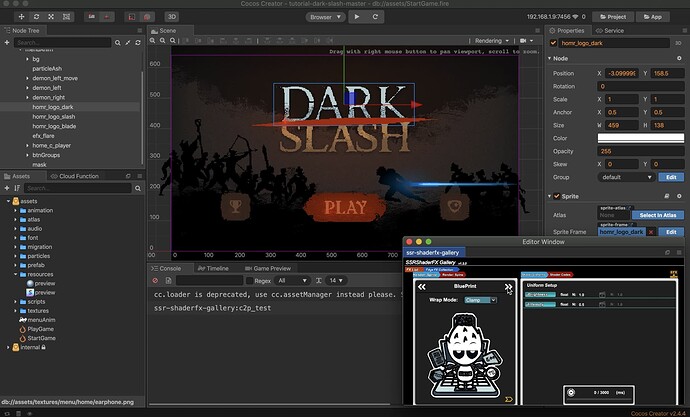 Today I tried a to make Gallery plugin to work with the v3.x version and here is some progress: 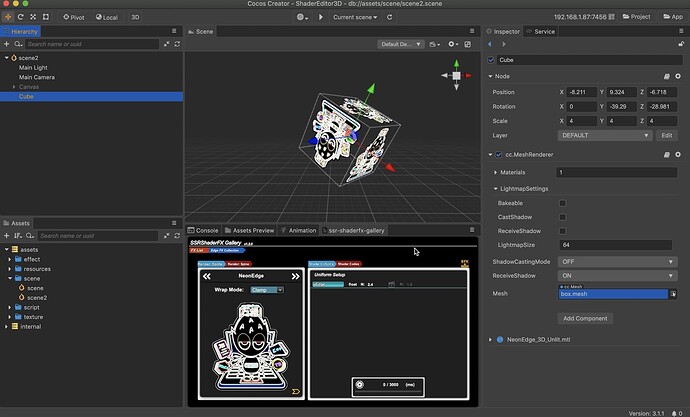 There are still lots of works to be done but I am sure it will be a great feature for this plugin and Creator as well.

Hi, I just bought your extension, but it requires log in, what should I do?
horchynskyi@gmail.com

Hi, My colleague just bought your extension, but he can’t log in.
When he log in it’ll show “this app is achive, please restore …”.

This my colleague email : mccskmitl@gmail.com

I can ask tech support for help.

I have created the account for you and sent it to your email.

BTW, I have created a skype account recently you can find me on skype for quick conversation

Thank you for your help

Now, He can use this extension

@supersuraccoon1 how did you all buy this? The Chinese payment methods listed are not familiar to me. I’m interested in the product though! How about PayPal?