Understanding the principles of the coordinate system

Understanding the principles of the Cocos Creator 3.0 coordinate conversion

On the Cocos Chinese community, you can see discussion posts related to coordinate conversion from time to time. Today

The canvas size displayed in Cocos Creator 3.0 is the screen area. The screen coordinates are calculated from the lower left corner of the canvas as the origin. The screen size can be obtained through the view.getCanvasSize API interface. 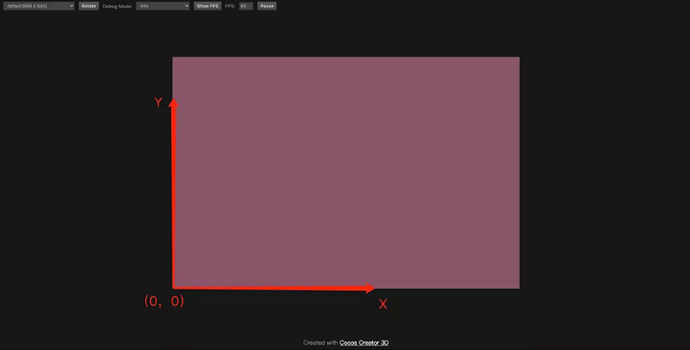 To know the starting point of the screen and the size of the screen, you can roughly estimate the position of the touch point when you click on the screen. Touch events can just help to verify, through systemEvent to monitor:

In Cocos Creator 3.0, the size of the 3D camera is always the same as the screen size without setting the viewport. This is very important, because the following content cannot be separated from the camera.

When you have selected the screen-adaptation scheme and the screen resolution is 1334x750, the engine will automatically fill the height of the screen with the height of the design resolution, that is, enlarge the scene image to 750 / 640 = 1.1718 times, but this zoom in won’t fill all of the width (960 * 1.1718 = 1125) making black borders are prone to appear (the game in the figure below does not cover the entire screen). This method is definitely a situation that most game developers don’t want to see. Therefore, the engine will automatically “cover” the screen width based on the widget component calculation (four sprites in the following figure).

Of course, this method also has drawbacks, that is, if the background is fully adapted to the design resolution size (adapting component Widget is added, and the UI content area is adapted up and down at the same time), it will be stretched to a certain extent. Here, because the stretching ratio is small, it is not very obvious, and interested friends can verify by themselves. 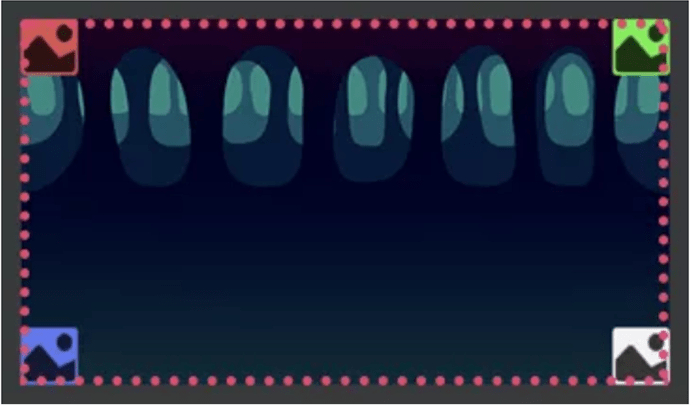 Conversely, if the screen resolution used is 960 x 720, the scene image is enlarged to 720 / 640 = 1.125, the enlarged width is 1.125 * 960 = 1080, which is greater than the screen width 960, so that content clipping will occur (as shown in the figure below). Therefore, the engine will automatically “limit” the width within the screen based on the widget component calculation (the four sprites in the figure below). The disadvantage of this method is that the background will be squeezed if it fully adapts to the design resolution.

The same principle applies to the adaptation width. Understand the principle of adaptation, you can choose a suitable adaptation scheme according to different platforms.

In the UI, what everyone should be most concerned about is how to set UI elements according to the position of the touch point.

For the Creator 3.0 users, the screen and UI are completely separated, and users can tap the screen to get contact information without UI. Therefore, to get the screen touch point is through event.getLocation(). If you want to obtain the coordinates of the “screen touch point” in the same way as Creator 2.x, you can get it by event.getUILocation(). The contact information obtained by event.getUILocation() can also be used to directly set the world coordinates of UI elements (because every pixel on the UI is equivalent to every unit in 3D, so you can directly set the UI element’s coordinates according to this coordinate point.) 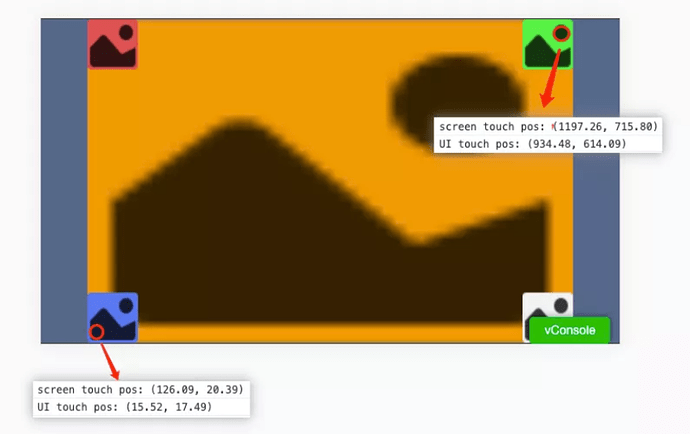 Note: this is because the UI does not have depth information, so you can directly set the world coordinates and fix the z value to 0. If it is a 3D node, also consider the depth.

Note: it is expected that the version 3.4 and later will be unified with the camera to convert, you don’t need to understand the concept of UI touch points, and the corresponding conversion method will be provided later.

Before performing the work of converting 3D node positions to screen coordinates, we must first understand how 3D objects are finally rendered on the screen. 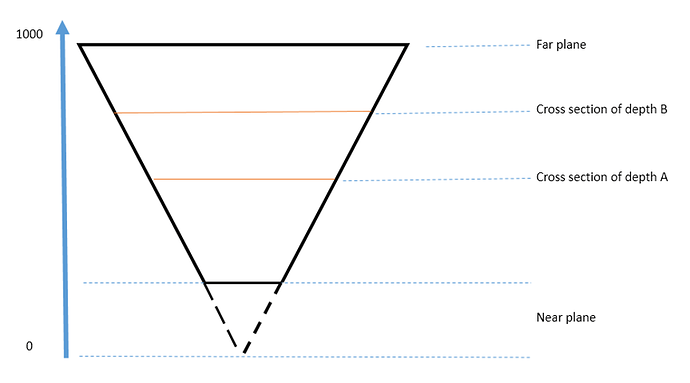 Here is an example of a perspective camera. This is a top view of a perspective camera. The near plane value of the perspective camera is 1, and the far plane value is 1000. The visual range of the camera is from the near plane to the far plane. From the figure, the closer to the near plane, or smaller depth value, the smaller the cross-sectional area, and vice versa. Cross-sections of different areas are finally filled and drawn on the same canvas, and the effect of near-large and far-small will appear. At the same time, different sections will undergo depth detection to realize that objects with a close field of view block objects with a far field of view. The final presentation is a bit similar to the process of taking a photo with a camera, and “shooting flat” all of the three-dimensional things.

Because flat things become three-dimensional, it needs to go through a lot of detailed processing. The most direct point that usually needs to be dealt with here is the deep reduction. According to the presentation of the screen, determine the depth it should be at. Therefore, you can specify the depth when converting the screen touch point to the 3D node world coordinate. The range of depth as shown in the figure above is between the near plane and the far plane, that is, 1-1000, and the normalized value of 0-1 is used in the numerical value. By default, if the depth is not specified, the transformed position of the object is at the near plane position, and if it is 0.5, it is about 500 from the camera.

Next, through the following code, you can easily realize the mutual conversion between screen coordinates and the 3D node world coordinates:

In order to facilitate observation, the far plane of the camera is adjusted to 20 here. 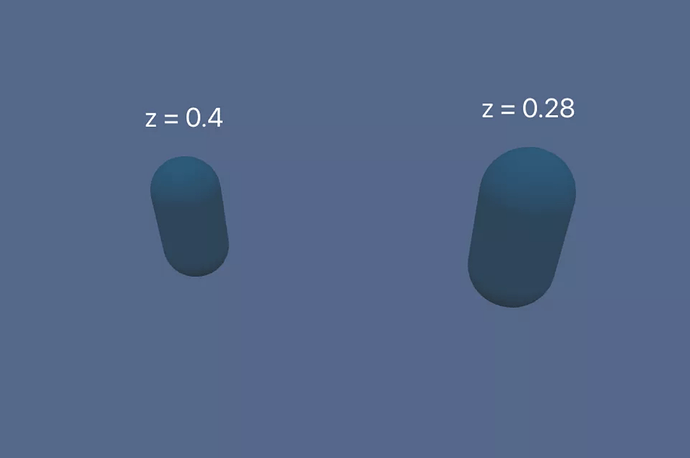 It is still necessary to be clear here that the UI touch point coordinates are the values calculated by the screen touch points according to the UI content area, that is, the UI world coordinate values. The concept itself is not easy to understand, and it seems complicated. Therefore, the engine team will improve this conversion method in subsequent versions and handle it directly through the camera. But the version before 3.4 still needs to be used, so here is a simple summary:

The value obtained by executing event.getUILocation in the callback triggered by the listener node event is that the touch point information is the value calculated by the screen touch point according to the UI content area, which can be directly used to set the world coordinate of the UI node. If there is a design requirement that needs to click on the screen to set the UI node, use this method directly.

Coordinate conversion between different nodes of the UI

Unlike Creator 2.x, the size and anchor information of UI nodes are no longer on the node, but each UI node will hold a UITransform component. Therefore, the transformation API between UI nodes is on this component. After obtaining the world coordinates of the UI node and after the screen touch point conversion, it can be converted to the local coordinates of different UI nodes according to the coordinates.

Before starting to talk about how to use radiographic testing, we must first talk about why there is radiographic testing. When many Creator 2.x developers develop games, they know that there is a “Size” attribute on the node, which represents the size of the node. When clicking on the screen, in most cases the engine calculates whether the node is clicked or not based on the position and “Size” of the touch point and node. The monitoring method uses node events to trigger a callback when the node is clicked. The code is as follows:

But using this method on the Creator 3.0 3D nodes are not feasible, because the 3D node does not have the so-called “Size” attribute, and the size of the object is different at different depths. Therefore, whether the object is clicked is not simply calculated by the position and “Size”. Here you need to use the ray detection function.

In simple terms, ray detection means that you can specify a starting point A and an ending point B. The engine will emit a ray from A to B, collect and return the respective positions, normals and other information of all objects that collide with the ray, so that you can know Who is the clicked object and how to deal with them respectively. Cocos Creator 3.0 provides 3 ways to create rays:

From the above methods of ray creation, if you want to click on the screen to determine whether an object is clicked, method 3 is used. Attentive developers may want to ask, why do I need a camera to determine whether a 3D object is clicked on the screen? I used two cameras to illuminate the same capsule in the scene, which probably explained the relationship clearly. 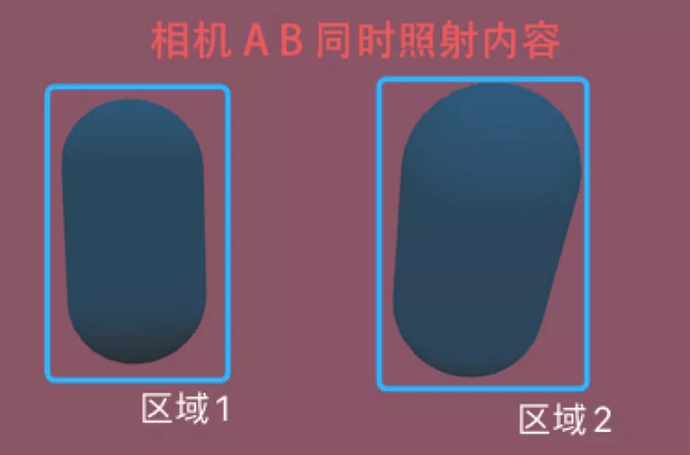 this was pretty helpful, thank you for sharing.

Thank you slackmoehrle!
This is awesome and answers so many questions.
@@@@@ 5 internet cookies for you!

How to convert SpriteA position to 3D node node B position?

I don’t understand what you mean. Can you clarify it for me? 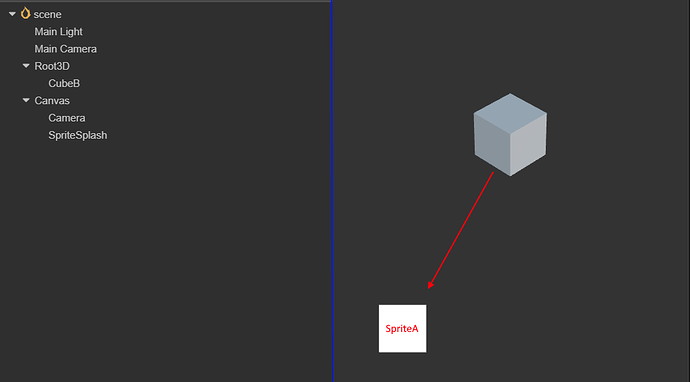 I want to move cube to SpriteA position. Or how to convert UI node local coordinates to 3D node world coordinates?

I can ask engineering to help us answer this.

You can refer to this example

You can have a try.

A post was split to a new topic: Unable to convert screen coordinate to world coordinates