Tutorial: Cocos Creator: The magic of light and shadows!

The author of this article, alpha, has been engaged in front-end game development for 5 years. After graduation, he first joined the Tencent Wireless Dalian R&D Center and then started a career in Beidiao. During his three years in Beijing, he has been using Cocos Creator. There he gained practical experience in memory optimization. Recently, alpha has been studying computer graphics-related technologies. Today, he will share with you some of Cocos Creator 3.3 's technical experience in creating screen space ambient light occlusion (SSAO).

Ambient lighting is a fixed lighting constant in the overall lighting of the scene, used to simulate light scattering. In reality, the light will scatter in any direction, and its intensity will change.

In 2007, Crytek released a technology called Screen Space Ambient Occlusion (SSAO) and used it in their game, Crysis. This technique uses the depth of the screen space scene instead of real geometric data to determine the amount of occlusion. Compared with real ambient light occlusion (based on ray tracing), this approach is faster and achieves better results, making it a standard for approximate real-time ambient light occlusion.

The following picture shows the difference between the scenes when SSAO is used and when SSAO is not used. Pay special attention to the comparison between the back of the phone booth and the corner of the wall, and you will find that the (ambient) light is blocked a lot: 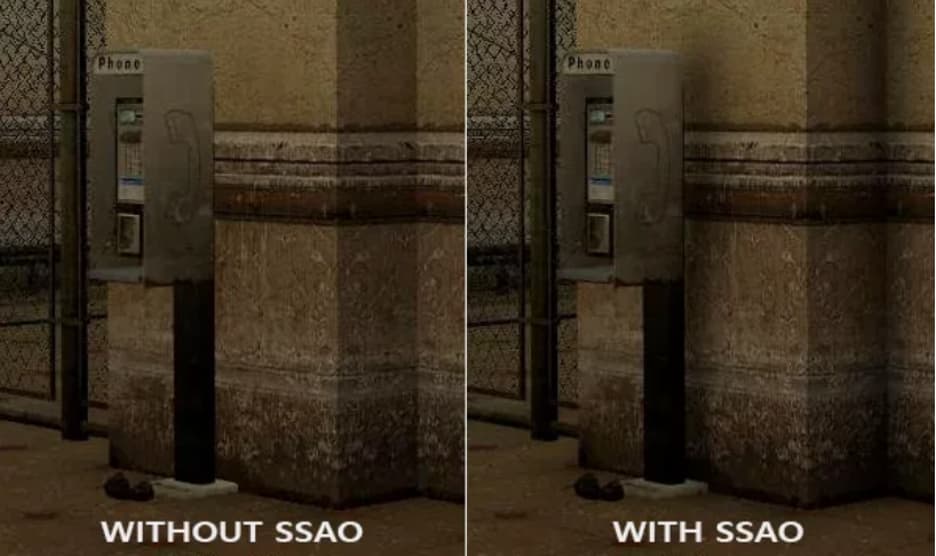 Although this effect is not very obvious, enabling AO does give us a more realistic feeling. These small obscured details can make the whole scene look more three-dimensional. 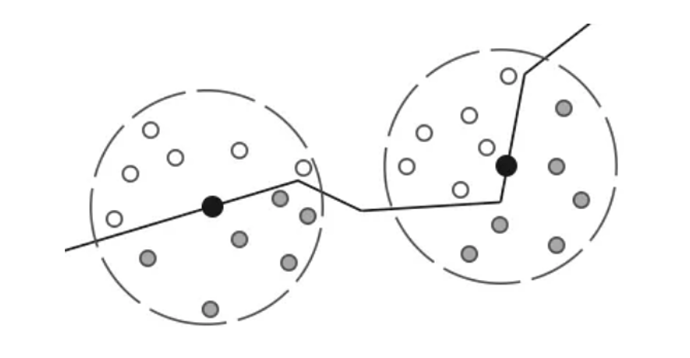 It can be seen that despite the apparent ripple effect obtained in the case of a low number of samples, the ripple effect completely disappeared after the introduction of randomness. The initial implementation of Crytek was to use a depth buffer as input, but this method has some problems (such as self-masking halo). For this reason, nowadays, the sampling core of the sphere is usually not used, but a sampling core along the surface is used—the hemisphere sampling core of the normal vector.

By sampling around the normal hemisphere (Normal Oriented Hemisphere), the geometry on the back of the fragment will not be taken into account, eliminating the grayishness of ambient light occlusion, resulting in more realistic results.

After understanding AO & SSAO, let’s take a look at how to implement SSAO based on Cocos Creator 3.3.1.

SSAO needs geometric information to determine the occlusion factor of a segment. For each segment (pixel), the following data is required:

By using a segment-by-segment observation space position, a sampling hemisphere core can be aligned with the segment’s observation space surface normal. For each core sample, a linear depth texture is sampled to compare the results. The sampling core will be slightly deflected according to the rotation vector; the obtained occlusion factor will be used later to limit the final ambient light component.

From the above, it is found that the data required by SSAO is not the G-buffer of the delay pipeline. You can get a simple understanding of what G-buffer is through the article "Delayed Shading Method. “ You can find a link at the bottom of this post. Read the engine code editor/assets/chunks/standard-surface-entry-entry.chunk and cocos/core/pipeline/define.ts:

The data layout of the engine G-buffer and the specific G-buffer data content can be analyzed through the above code. The depth value will be calculated using G-buffer later.

The corresponding pipeline configuration is as follows. Add ssaoStage at the top of stages under LightingFlow and specify the corresponding material. You can see that the engine actually supports PostProcess now. Just specify the material. Maybe the current version is not perfect. Therefore, the engine group has not been made public. In fact, SSAO can be regarded as a post-processing effect. The properties of pipeline resources are set as follows: 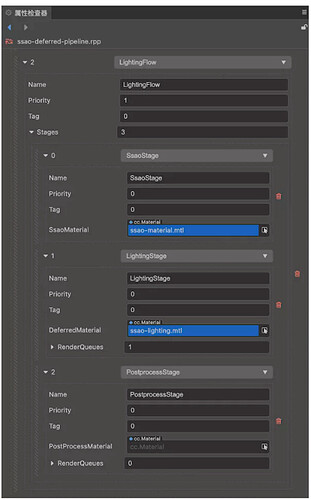 The custom pipeline script is as follows:

Modify the rendering pipeline to a custom SSAO pipeline through the project settings: 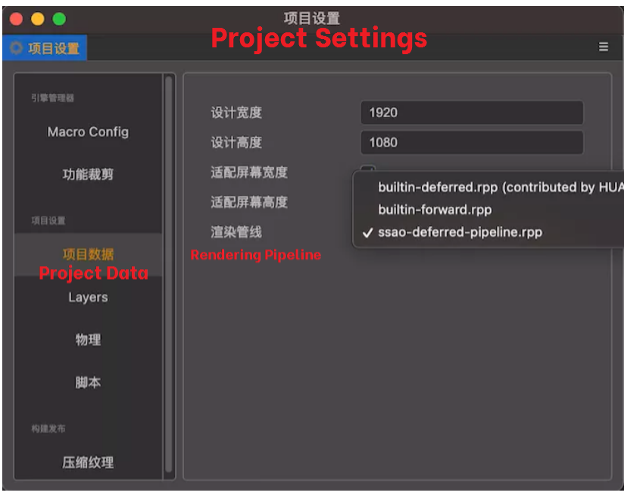 We need to generate a large number of samples along the surface normal. As mentioned earlier, I want to generate samples that form a hemispherical shape. Since generating a sampling core for each surface’s normal direction is very difficult and impractical, the sampling core will be generated in the Tangent Space, and the normal vector will point to the positive z-direction.

Assuming there is a unit hemisphere, generate a sampling core with a maximum of 64 sample values:

Obtain the linear depth value through the PostionMap in the G-buffer:

The depth map is as follows: 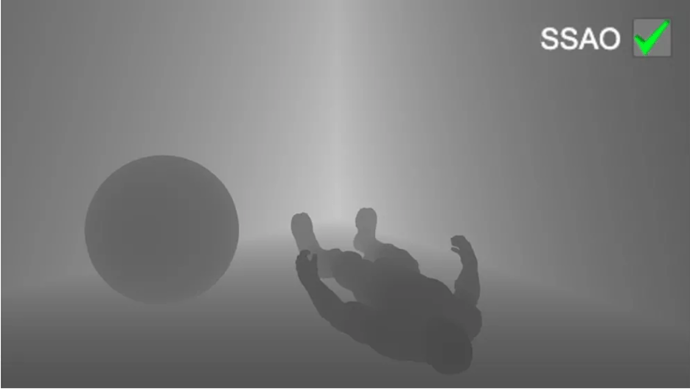 The following IMAGEshows the texture produced by the ambient occlusion shader: 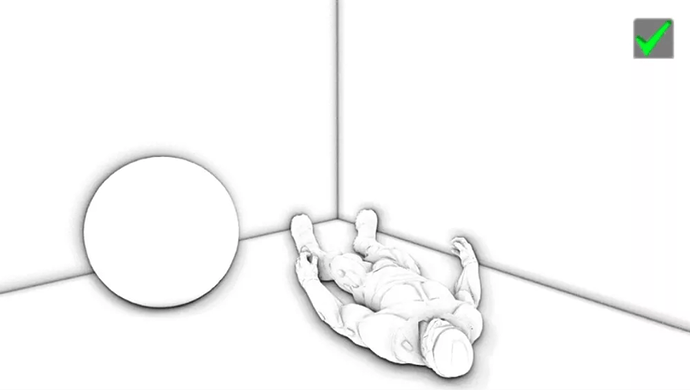 It can be seen that the environmental occlusion produces a very strong sense of depth. It is clear that the model must be lying on the floor instead of floating in the air just through the texture of the environment occlusion. 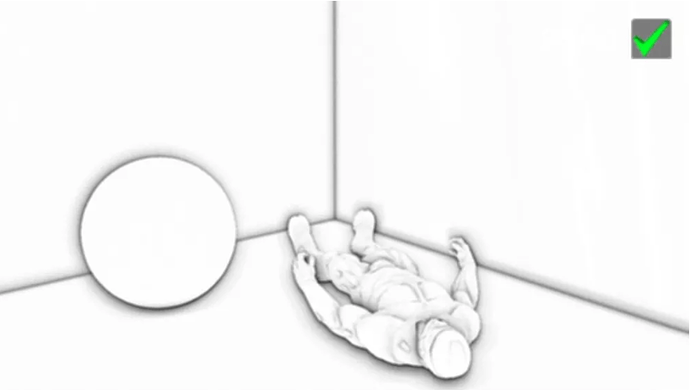 Finally, let’s take a look at the final rendering result comparison. First of all, the effect of SSAO is turned on: 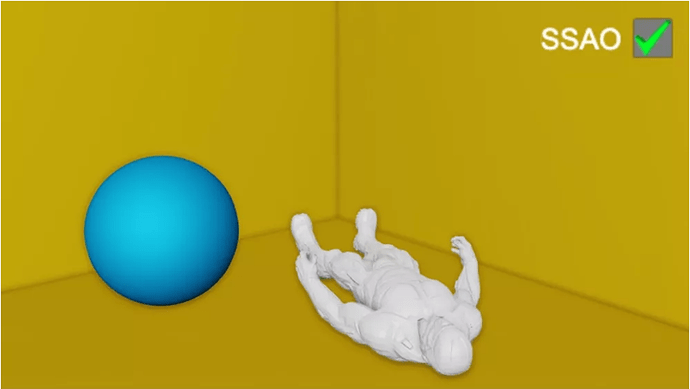 The effect of SSAO turned off: 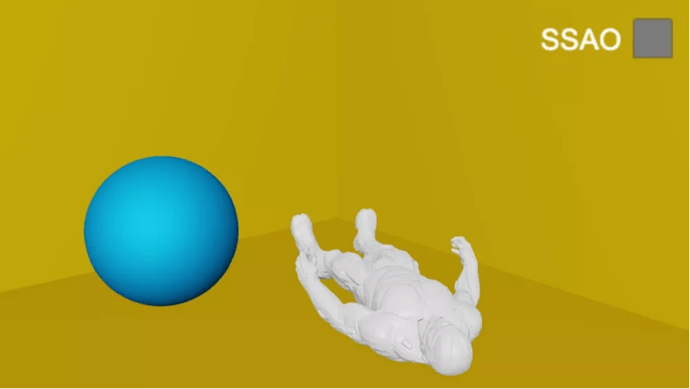 Screen space environment occlusion is a highly customizable effect, and its effect largely depends on the parameters that we adjust according to the scene type. There is no perfect combination of parameters for all types of scenes. Some scenes only work with a small radius, and some scenes require a larger radius and a more significant number of samples to look more realistic. The current demo uses 64 samples, which is quite a lot. You can adjust the core size and radius to get the appropriate effect.

Known issues with my demo

I love these posts. Very informative. Thank you
Keep them coming