The Chinese team shared a great article explaining the Cocos Creator 3.0 3D physics in detail. We felt this would help to give a quick idea on new developments with our framework and making physics development a bit easier with great performance.

Please note that the documentation is continuously updating. Always check our newest documentation and ask for support on our forums and Discord if you need help.

The following content mainly explains the functions and technical principles used in it. The space is limited and cannot cover all the details, but most of the content is introduced in the engine documentation and can be read together.

For the development of 3D physics applications in Creator, the first step is to choose the physics engine. Currently, there are three options available, namely builtin, cannon.js, and bullet (ammo.js). The main difference between them is the package size, performance and functional characteristics.

The main functional features are as follows:

The following introduces you to the more important components and functions of the physical module.

In the figure below, white is static, blue is kinematics, and yellow is dynamics. Among them, white and blue are both manipulated transformation information, and it is obvious to see the following manifestations:and several manifestations are clearly visible.

The reasons for the above phenomenon are:

Whether it is necessary to add rigid body components is the most questioned, here is a little trick:

There are still many areas that need to be polished in this framework. For example, some developers think that configuring grouping on static objects is not convenient enough, grouping should not be separated from the node layer, and rays should not have groups.

The following example will combine several problematic scenarios in an archery game to introduce the corresponding functional characteristics and problem-solving ideas, as well as the how to solve each point involved.

In the figure below, two box shapes are used to combine a cross, and all the collision bodies on the node are combined into a cross shape. This is the most basic way to achieve a concave shape. 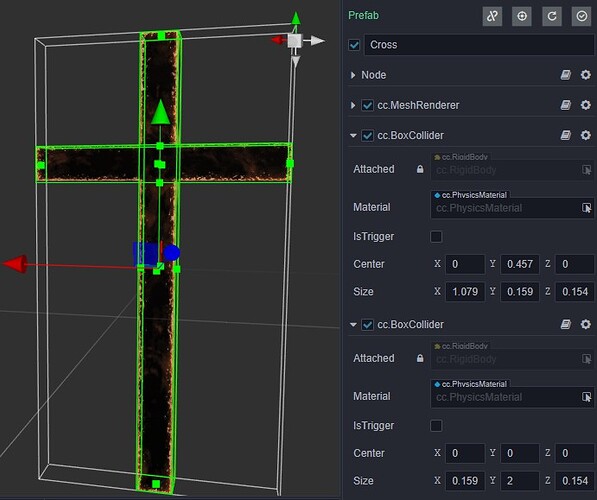 It's easy to assume that if you add collision bodies to multiple nodes to piece together the cross, that it can keep the overall structure in motion after collision. This is impossible in the current structure, and only a single node can be added.

The first step in archery is to draw the bow. The arrow needs to completely follow the elastic string. You don’t want the arrow to be affected by the physical rules. At this time, the rigid body of the arrow should be set to the Kinematic type.

The second step is to loosen the elastic rope to launch the arrow. At this time, it is hoped that after setting the initial velocity of the arrow, it can move according to the physical rules, so set the rigid body of the arrow as the Dynamic type.

The general process of retrieving an arrow is to restore the arrow to the bow once it touches the trigger area after the arrow is shot out. This can be achieved by making a monitoring area. First, use the collider component to piece together the area, and at the same time check the collider component IsTrigger. (The blue floor in the picture below is the monitoring area).

This can be error-prone:

Aiming is a step before archery. The crosshair is on the ray where the arrow points, and a static plane collider is added in front of the cross, and then the position of the crosshair can be obtained by ray detection; 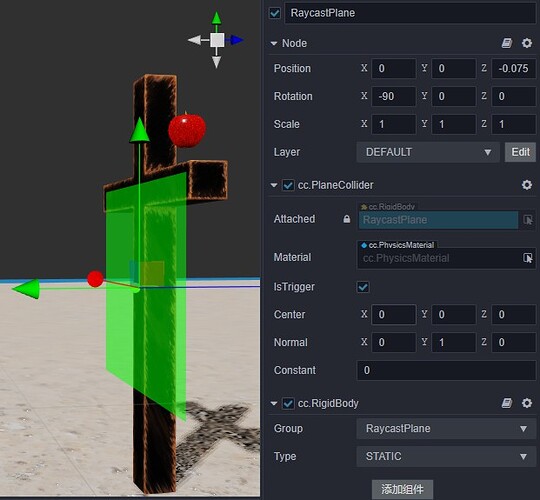 The static plane is only used for ray inspection, and a group is created for it, and it is not inspected with arrows, apples, etc., this is the most general performance optimization method.

When calling the ray detection method, set the incoming mask to only and static plane detection, that is 0b10 (binary representation).

The error-prone points are as follows:

Generally, apples have concave surfaces. It is very tricky to deal with concave or continuous and smooth irregular surface models. This is because the current theories and techniques are based on the discrete and convex world (using the differential approximation to represent differentials in calculus is the most typical example).

In the real-time physics engine, such objects can only support static or kinematic rigid body levels, and there is nothing that can be done about dynamics. Unfortunately, the real Apple’s motion performance strongly relies on dynamics. In this case, you can only add a mesh collision body in the form of a convex hull to the apple (you need to convex check it) and a dynamic rigid body, using approximation object to participate in the simulation.

Kinematic performance and simulation parameters have a very strong relationship, its penetration is the most representative phenomenon, which can increase the step size and the number of steps is achieved by reducing the adjustment step is a tip: input fraction, that is 1/Frame, which Frame represents frame rate.

The error-prone points are as follows:

The following describes how to use impact data to achieve a dynamic mechanical type of rigid body motion control.

Once you can determine whether you are on the ground, you can add jumping behavior. The first thing to be clear is that the dynamic rigid body is used here (the reason is that I want to get more real physical feedback after taking over the rigid body through the physics engine), so we need to change the physical value to achieve the goal, such as directly linearizing the character The speed of the y component is set 5, as shown in the figure below (the collision body in the figure is a capsule body, which is related to the actual scene and can be changed by yourself).

By directly changing the y-axis speed, it can work well on a perfectly horizontal ground. But sometimes jumping needs to behave differently according to the slope of the ground. Here is an idea: provide a configuration factor, ranging from 0 to 1, and interpolate the current normal and the vertical normal according to the factor to get the target normal. And multiply by the jumping speed, then get the desired jumping speed, add it to the linear speed of the character.

The only trick to make good motion control is to control the speed, but this is also the point that is most likely to be misused:

But in fact there are many good characters are based control Kinematic into the bank realized, there is far more complex technical details in this article.

I believe everyone is excited to see the physical realization of the “Jelly Beans” above. The 3.0 engine can now fully support the development of the same type of game. You can follow the guidelines in this article and refer to our examples to try more.

In the future, there is still a lot of room to explore the physics engine. The current plans include: