Just wanted to post this and thank the community for working on cocos2d-x! Also, hope this post will inspire other developers to never give up on their vision. Long story, short - we been using cocos2d-x since 2013 to make the best “pizza” cooking simulation game. Our first pizza game did pretty well in terms of downloads, but retention was bad; second game did slightly better in downloads and retention but nothing too impressive. Then, we made “Good Pizza, Great Pizza” and has been our most successful game to date:

It has been downloaded by over 70 million players and has reached the top charts in USA, China, Korea, and Japan. In particular, it was the #1 overall app in Google Play - South Korea during October to November 2018.

We been working to further expand the game and recently added a new chapter.

Again, thank you to everyone that has worked on cocos2d-x! We’ll be attending ChinaJoy this year so hope to meet some of the cocos2d-x team!

Ok I’ve been playing all this time. This game is fun. The art is great, it took me a few mins to get my cutting down. 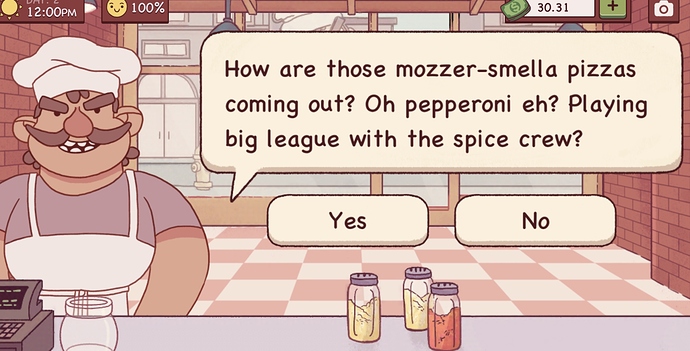 @appkingpin let us send you an official Cocos t-shirt.

@slackmoehrle thank you so much for playing our game! I just sent you an email. Would love a t-shirt to represent!

Awesome. We would like to interview you at China Joy. I will put you in touch with our marketing team. We appreciate you using our tools!

Just wanted to let you know I visited the office in Beijing, did an interview and went to dinner with some of the team at Cocos2d-x and Chukong! Thank you for your help to arrange this!

I’m sorry that I couldn’t attend this! But I heard that everything was great and the interview was amazing. I appreciate the time you took to do this with us. Also. I’ve been playing your game so much lately when I need a quick fix. I’m pretty good. Also, what a great concept and game play.

@appkingpin I am still loving this game.

There are so many aspects of this game I like. One things is the eggplant growing. I need to start buying upgrades for my pizza shop.

Thanks for the feedback! As for the material cost, each ingredient/topping has a cost as you place it on the pizza - something we should have better clarification on.

Yes, we are fixing the confusing and sometimes wrong cheese orders.

In Chapter 3 of the game, there are some days where you can take on multiple customers at a time. We are improving on this mechanic and will roll it out to the entire game for special days.

Glad you liked the eggplant growing! It is part of a bigger feature we are working on. We have so many idea/features to improve the game - just taking us awhile!

Thanks for the reply. I’m collecting some more feedback and I have a few ideas.

One thing. Anyone that comes into the shop that can’t pay or doesn’t have enough money I always make a cheese pizza for. To be nice and it’s the cheapest to make. Is there any benefit to making them a more fancier pizza?

Look forward to the additional feedback. Currently, it doesn’t matter what type of pizza you make when you are being generous to those customers; we are working on some Easter eggs based on this though

I’ve been playing Good Pizza Great Pizza off and on ever since we attended your GDC talk. It’s really fantastic!

Wow, thank you for attending our talk and for your continued support. We are working on some cool new game features for 2020.

Wow, that is SO awesome! Man, I wish I had 1/10 of your business. You did a great job all around!

I have seen your developer interview, just curious to know the following questions, If you are comfortable else ignore them.

Thanks for posting this amazing thread

Your game makes me want to eat pizza all day!

Hi @ousaf, thank you! Here are my answers and comments:

Had you initially done paid campaigns to get the game noticed?

No, we did not run any paid campaigns to get the game noticed.

It is all organic with the majority from Google Play organic search/rankings. We never got featured from Google Play during that time. To this day, we still have no communications with Google Play - we been trying to reach out to them, but never get any feedback or responses. If anyone has a Google Play contact please share :). Apple only started featuring the game in 2017 after we showed them the results we were getting on Google Play.

We never worked with a publisher. It really depends on your game and also what your team’s strengths are. For example, if you are making a hyper casual game, you would probably need a publisher unless you have a huge advertising budget and the monetization down to make back the UA spend. If it is casual/indie, then I think you have a good chance going at it alone - just really depends on what you and your team are good at and how patient you are. Having said that, we been thinking of starting a publishing division just to help out other small studios/Indies that are missing the marketing and game optimization side. If anyone is interested would be happy to discuss.

Do you credit the success to lots of sudden updates for improving UX/UI & bug fixes to game, maybe Play Store algorithm noticed that rate of updates and equally the +ve feedback increased thus recommending others more often.

Yes, I think a huge part of the game’s success is due to increasing core metrics from UX/UI improvements and bug fixes. We were and have been updating the game at least monthly. We have a GDC talk (2018) were we go into more depth of what we changed to increase KPIs such as retention, session time, etc.

Hope these were helpful.

@appkingpin thank you very much for answering all questions, it’s really helpful.