The original idea of the project

In my development history, projects always need some features that the engine doesn’t have, or the existing features of the engine can’t meet the demand.

So I put all the features I wanted to add to the engine in one project: Cocos Enhance Kit.

I hope everyone can participate in the development of this project (fix bugs), so it will be open source.

I hope this project will be the first to implement some of the features that people expect the engine to have and bring a “native” experience.

I hope this project can be like an alpha version of the engine, it can be a reference in the application effect, and help the engine team to implement the features that people expect the engine to have faster.

The item of adding multi-texture rendering features to the engine, for example, has been done by many people, but.

Precedent for making multi-texture rendering features native to the engine.

The PixiJS engine has officially implemented multi-texture rendering in the v4 release in 2016.

The > Phaser engine is based on the PixiJS engine, so it also supports multi-texture rendering.

What are some of the features now? 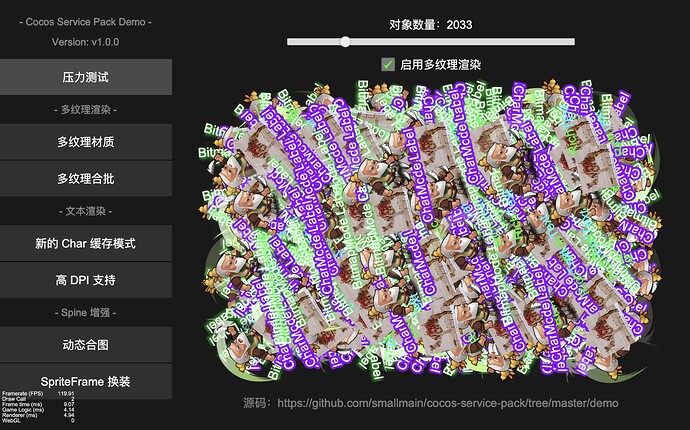 Previously, we would increase the fontSize and decrease the Scale of the node to achieve this, but now it is directly implemented inside the engine, and the scale can be adjusted with one line of code.

And provide a global switch and a single-component switch, you can control the range of this feature on as you like. 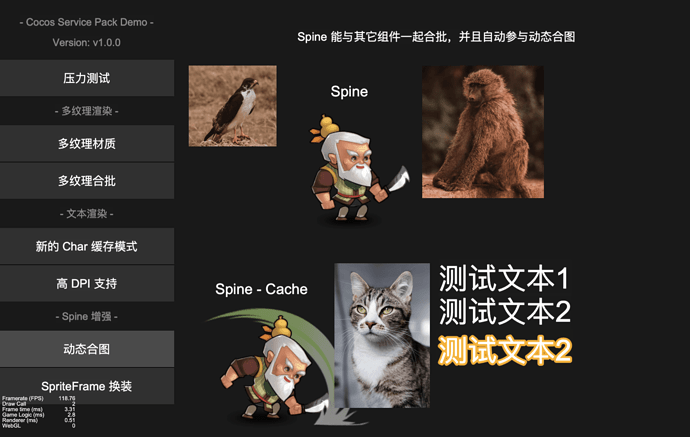 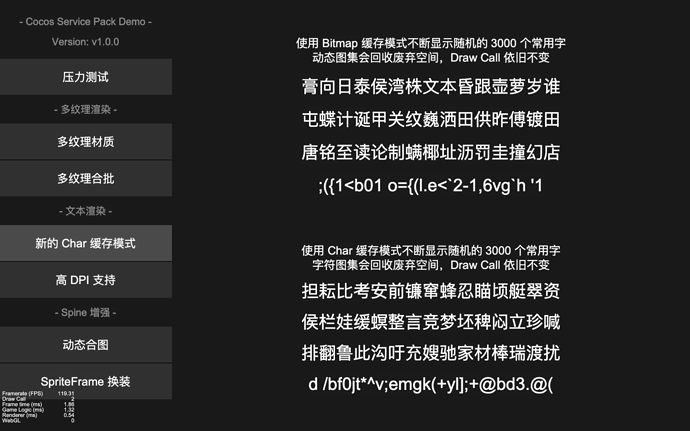 As long as the dynamic merge and Bitmap cache modes are used properly, most scenes no longer need to do special Draw Call optimization (hitting the set, adjusting the node order, layering rendering) to have a good number of Draw Calls.

The Spine component supports merging with other components, merging into dynamic sets and SpriteFrame swap 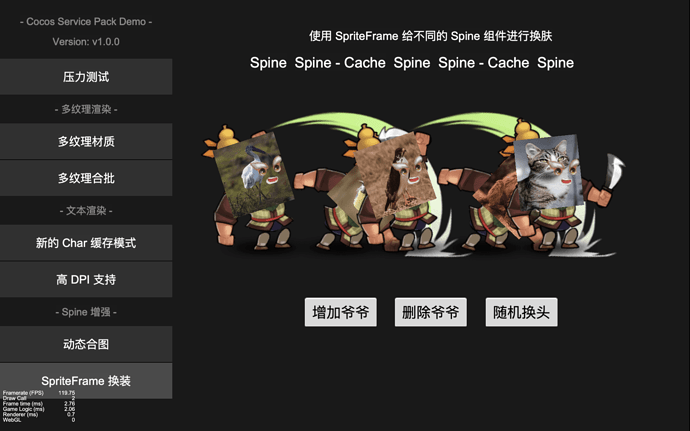 As mentioned in the title, because we found that the forum often need to use SpriteFrame to dress up Spine, and there are many companies use Spine to implement common animations, even frame animations, which may have a big performance burden if they can’t be combined with other components.

You can get the full detailed documentation below, and it only takes a few steps (setting up a custom engine) to apply all the above features.

The enhance kit is extremely restrained in making changes to the engine, and will try to ensure compatibility and not modify the original defaults of the engine, so you don’t have to worry about “suddenly using it somehow”, and almost all new features are enabled and disabled by default.

So after installation you may find that nothing seems to have changed in the project, we recommend that you read the Getting Started tutorial to understand the recommended way to use it.

Finally, if you want a one-click install, then consider my personal paid engine extensions.

Of course you can write a script to implement it in minutes, so consider this a sponsored link and thank you for your support

Now a regular member, go ahead and add.

great job, bro!
thanks for your contribution.

Thank you all very much for your positive feedback on the issues with Enhance Kit and for your continued assistance in helping me resolve them.
The new version has been uploaded to Github, and the paid engine extensions have been submitted for review in the Cocos Store, please wait for approval.

Thanks to Jack Wang, 火焰库拉 for the above feedback.

火焰库拉？
hahahaha, I know him.

Thanks for all the feedback!
The new version has been uploaded to Github and the paid engine extension has been submitted for review in the Cocos Store, please wait for it to be approved.

Special thanks to Astarte for the feedback above!

Need to make a video in Chinese and English about what you are doing. English subtitles work. But should show the features. Will help out in seeing what is possible with it.

That is great, awesome.
Just couple of days ago, i faced that problem with font rendering on hDPI, thank a lot.

And , there is a BIG question,
how to use these fixes separately in case do not broke actual project?