As we move past the epidemic that attacked the world, we’re thankful to be working in an industry that has helped people get through these difficult times. We have seen so many amazing stories from 2020 about how people kept fit, got educated, and kept socially active thanks to the games on mobile phones, PCs, and consoles.

This return of normalcy in 2021 has helped bring people back together in the game industry for those living in China. With more face-to-face events occurring like ChinaJoy and White Nights Shanghai and more Cocos salons, it’s never been a great time to be part of the industry. Not since the great influx to the industry in 2015.

As we move toward the second half of 2021, we’re excited to see what’s being built with the release of Cocos Creator 3.x earlier this year and find out how well we did in the past six months. With thanks to our friends at Gamma Data, there is both great news for the Chinese game industry for the short term but lingering questions about where the future heads for the industry.

We currently see over 150 billion RMB (est. 23 billion USD) in total revenue in the first half of the year, showing a 7.89% increase from the enormous growth in the first half of 2020. This continual growth is impressive and shows gaming to be a powerhouse in China’s entertainment industry.

China has had a 91% increase in revenue in the past five years of Q1 and Q2 growth. The growth comes mainly from the development of mobile technology in China today. 76% of the total revenue today comes from mobile games.

Though this total revenue growth is positive, some numbers are bringing concern to Chinese game developers. The first being that this year is the first year in the past six years where mobile game sales were not in the double digits in growth 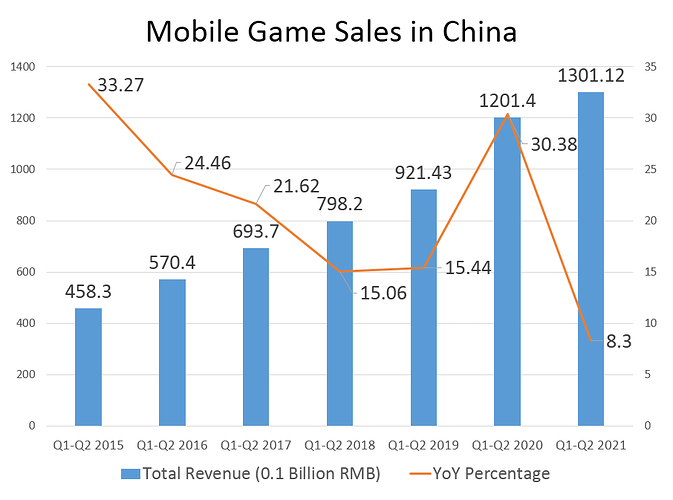 With 130.1 billion RMB (est. 20.1 billion USD) in revenue coming this year already in mobile, it’s not a slouch, but 8.3% may mean the growth train is slowing down. This comes as the number of gamers in China starts to stall and looks to have peaked in saturation. Adding to this, with saturation for mobile phones hitting China, it’s beginning to look like growth in gamers is at a peak for the next few years. 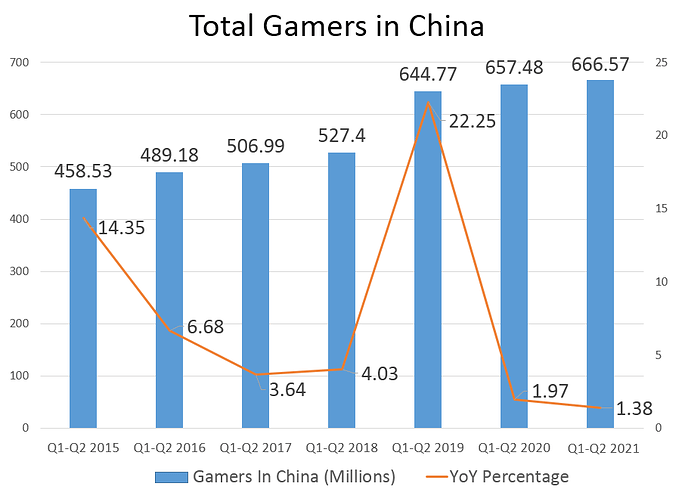 This slowdown in sales and gamers may become a long-term issue for the industry that has repercussions for other sectors inside the industry, such as e-sports. Currently, e-sports are hitting the same problem, with revenues showing almost zero growth between this half of the year and the past half-year. 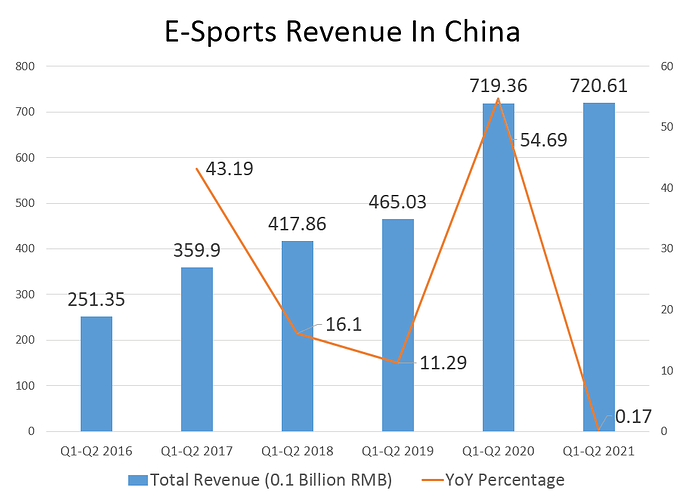 This also hit users of e-sports as well, with growth only at 1.13% this first half of the year, narrowly hitting 500 million users. This was in stark difference to the growth 2020 gave to the industry. 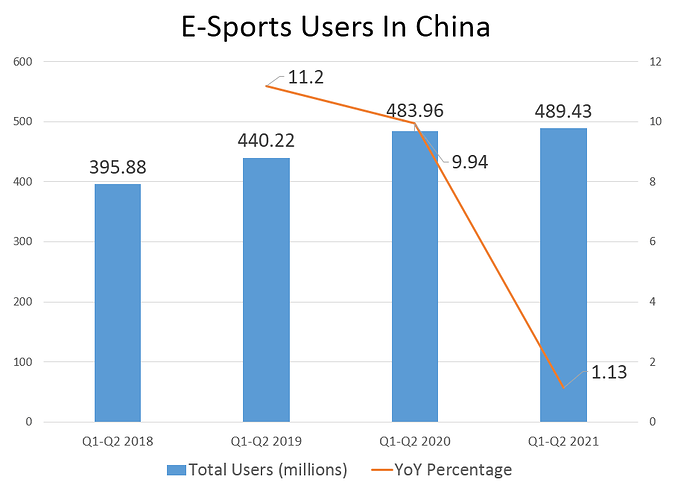 Good news coming from the report shows that China still has a solid revenue stream inside the country and good growth overseas as more game developers start to build games for the western market, bringing in more revenue to the country.

Games built in China for the overseas market continue to stay in double-digit growth, with the first half of the year raking in 8.4 billion RMB (est. 1.29 billion USD) in revenue, an increase of 11.6% from last half-year and a 5-year growth of 234%. Thanks to games like Cocos-built AFK Arena, Genshin Impact, and Game For Peace (PUBG Mobile outside China), Chinese games are making grounds all over Asia and the world.

For those wondering what are the top game genres for the year in China, RPGs continue to hold, while Card Battle and Strategy games still hold on game players. The three game types with the highest revenues are fantasy/magic themes, cultural fusion themes, and modern subject matter, according to Gamma Data.

From the team at AppGrowing, on the whole, the number of mobile game ads in the first half of 2021 showed an upward trend and reached a peak in June.

App Growing tracked a total of 13 million mobile game ads in the first half of 2021, of which 62% were newly launched mobile games, with more than 30% of these games hitting the top 100 games in China.