I was testing Cocos Creator 3.3.2 Android build on some devices and found that the app doesn’t render anything in some Android 7 devices. Tested on OPPO f5 Youth and ASUS Zen Phone 4 Selfie.
The app runs fine on latest devices without problem.
Here’s a snap from build panel for Cocos Creator 3.3.2 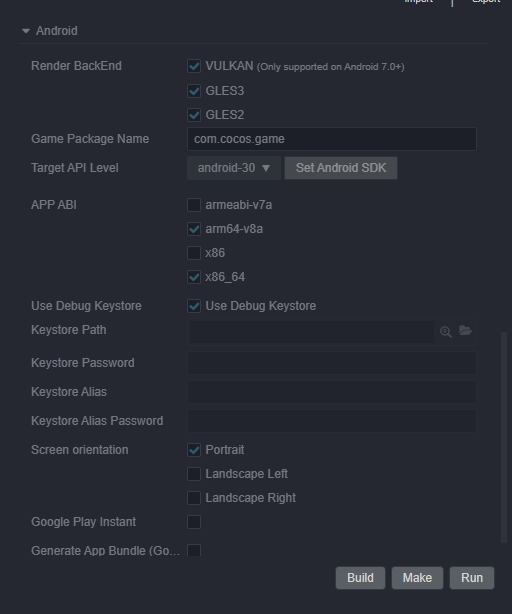 Thank you for providing all of this! I will ask engineering to have a look.

I tested a bit by tweaking the build settings, found out it’s something to do with VULKAN graphics backend.
If I have just the GLES3 or both GLES2 and GLES3 the app works fine. But problem starts when I include the VULKAN as well, the app doesn’t even render the Cocos splash screen (Just a white screen is shown before displaying black screen).
Shouldn’t the render backend switch to GLES2 or GLES3 if it doesn’t support VULKAN.

This problem doesn’t seem to occur on other Android 7.1.1

Is it safe to not build for VULKAN at all?
May I also know what Graphics Backend settings does Cocos Creator 2 for the build?

Currently it is if VULKAN is not supported, it will switch to GLES2 or GLES3.
Is there an error message reported?
If there is no error message, it is possible that there is a problem with the driver, the specific need to debug to see the details.
2.x → gl2.0

Is there an error message reported?

No error message. In place of the splash screen a white background is displayed. Few seconds later it turns black.
Yea, could be a driver issue. I’m going to test once with 3.4.0 as @linrm suggests in another thread

Same issue persists with 3.4.0. I’ll stick to GLES backend for the time being.