From the last chapter, we have already talked about the essential content of the shader. The most important part is how to compare the application of WebGL to Cocos Creator. Because the underlying rendering of all game development tools encapsulates the graphics rendering API, as long as you know the principle, you can easily use different game development tools to create the desired effect. This chapter will make some additions and extensions to the previous content.

In Chapter 6, we talked about the configurable parameters included in the material:

Therefore, here is an attempt to create the previously defined shader foo in code and set the previous operations on the editor in the form of code:

If you need to modify it at runtime, you can dynamically modify it in the following ways:

UBO (Uniform Buffer Object) is a uniform buffer object. It has the same function as a normal uniform, except that it can manage one or more uniform data at a time. It replaces the way of gl.uniform to transfer data. It will no longer occupy the uniform storage space of the shaderProgram itself and store more uniform variables.

When it comes to UBO, it is necessary to mention the Uniform Blocks in the shading language GLSL (the last chapter mentioned that the uniform is declared in the block), which brings together a large number of uniform type variables for unified management. For a large number of uniform types, Variable procedures can significantly improve performance. Compared with the traditional way of setting a single uniform variable, it has the following characteristics:

1.Can store more uniform type variables
2.Can simplify the process of setting a large number of uniform variables
3.You can quickly update the value of the uniform type variable in the program in a single shading language program by switching between different UBO bindings
4.All uniform variables can be updated by updating the data in UBO in different shading language programs

It is stipulated in Cocos Creator that all non-sampler uniforms of the shader should be declared in block form. Considering that UBO is the only basic unit for efficient data reused in the rendering pipeline, a discrete declaration is no longer an option. Therefore, a uniform declaration has more stringent requirements for data distribution, such as:

Among them, the rules of padding are:

Before explaining the WebGL frame grabber tool, we must first know what DrawCall is. A DrawCall means that the CPU sends a drawing instruction to the GPU once. If 80 objects need to be drawn in the scene, it may be necessary to submit about 80 DrawCalls, which means that the GPU needs to draw 80 times in a rendering frame. If the DrawCall is too high, it will directly affect the game’s overall performance, causing problems such as lag. So you need to know the DrawCall information and merge and submit as much node data as possible. Therefore, we need a tool to help us analyze what each DrawCall draws so that we can take appropriate methods to optimize the data so that the same rendering data can be merged. This tool is also called a frame grab tool.

Spector.js is a good DrawCall analysis tool on the Web, which can be downloaded directly on the google store. After installing this plug-in, you can see this icon in the upper right corner of the chrome browser.

When the game is running, click this button to enable the frame grabber tool. The button will also be highlighted at this time. Click the button again, click the button in the red frame, and the current frame rendering page will pop up.

On this page, you can see what the current frame rendering has done. On the left, you can click to switch between different drawing commands and observe the changes in the interface view after each gl command is executed. The gl command is executed in the middle. On the right, you can view the detailed content of a drawing command, slide down to see similar state Data, and which vertex input attributes and uniform attributes are submitted.

You can also see the button to jump to the vertex shader and fragment shader at the gl instruction in the middle if it is a drawing instruction. In the upper right corner, there are some status and information panel switches. You can understand by clicking on it yourself.

As can be seen from the figure, there are no commands such as clear or clearColor. As mentioned before, all related to clear are on the camera. There is an attribute ClearFlags on the camera that is used to handle the clear behavior. Their respective roles are: 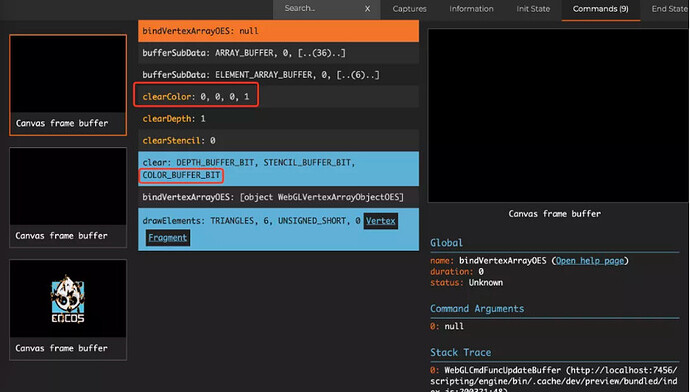