Does it really shine? Let your characters have realistic hair

In the previous chapter, we mainly focused on skin rendering and subsurface scattering. In today’s chapter, let’s talk about hair.

Compared with skin, hair maybe even more of a challenge. We need to process a large number of polygons in units of hair bundles and pile them into various hairstyles. At the rendering level, we need to use the shader. The alpha channel removes unnecessary pixels on the polygon presenting a single slender, dense hair shape as a whole. Suppose you are also interested in learning about the description of these shapes and details on the hair models. In that case, you can refer to Adam Skutt’s role hair modeling industry benchmarking tutorial.

Our goal is to import a standard PBR character hair art resource into Cocos Creator for rendering. Art resources include inherent color maps (including alpha channel), normal maps, and AO maps. We will make a custom hair shader based on the standard PBR shader built-in Cocos Creator, just as we did with the skin article.

Note that we need to make a small requirement for art resources: the intrinsic color map (including the alpha channel) must be stored in the .tga format with a separate alpha channel. The shader we will write does not correctly render .png format images with pixel culling.

Laying out the theory

First of all, we still need to answer a question: what kind of effect can make the hair more realistic? 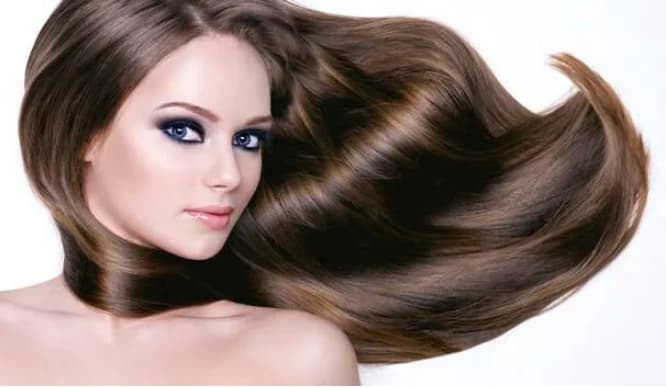 Observing the above picture, the first thing that catches people’s eyes is undoubtedly the long strips of highlights on her hair. Looking further, we can notice that there are two color changes in the long strips of highlights: One is the whiteish highlight color that we are familiar with. The intensity is slightly higher. The other is the highlight color that is slightly higher than the inherent lightness and saturation of the hair. 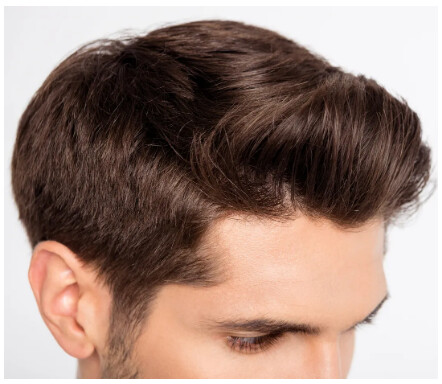 In the picture above, we can see two highlights that seem to intersect, which is determined by the way his hairstyle is combed. This tells us that the highlights of the hair basically follow the direction of each individual hair strand. In the same bundle of hair, all the hair strands are basically staying the same, so their highlights gather together to form a strip. 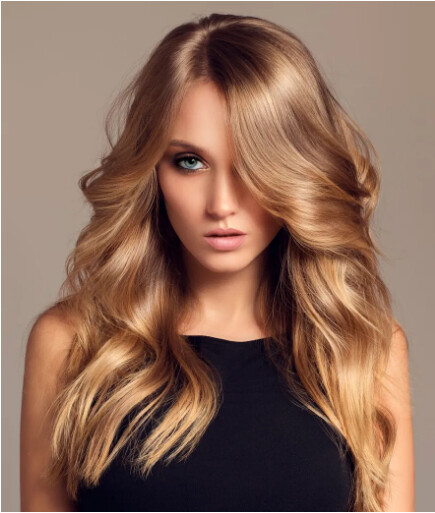 Taken together, the laws we can observe are: 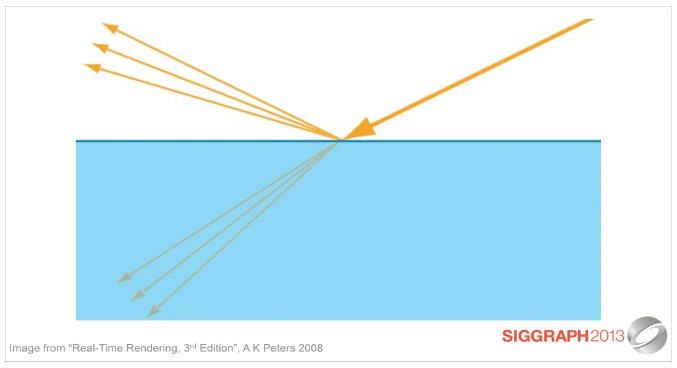 In addition to hair, any material that is physically densely combined with countless high-gloss filaments will exhibit anisotropic high-gloss characteristics, such as silk, most crystals, polished wood, brushed and polished metal, etc. 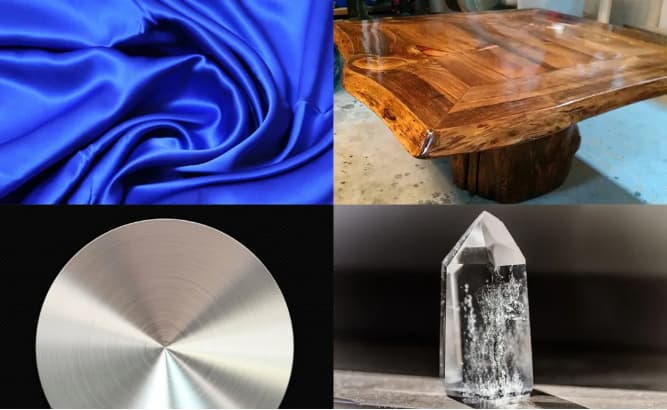 Since the anisotropic characteristics of the hair are reflected in the highlights, then we should start with Specular.

The “N·L” method that we have already talked about in the skin article, using the normal direction of the object and the direction of illumination, allows us to quickly get the value of the relationship between light, illumination, and darkness. Since the highlight is also related to the object’s surface characteristics and the light direction, can we use the same method to get Specular?

Of course, we cannot mechanically understand Specular as a Diffuse with extremely high strength and extremely small range. In addition to being affected by the direction of light, highlights are also related to the angle we observe. Therefore, we introduce a half vector H that is the sum of the illumination direction (L) and the observation direction (V), and apply the “N·L” method to obtain the dot product with the normal N. The intensity of the highlight is much higher than the intensity of Diffuse, so we output the intensity parameter as the index of the dot product. From this, we have a basic formula for calculating Specular:

However, this formula only applies to isotropic conditions and does not consider the anisotropic characteristics of hair. 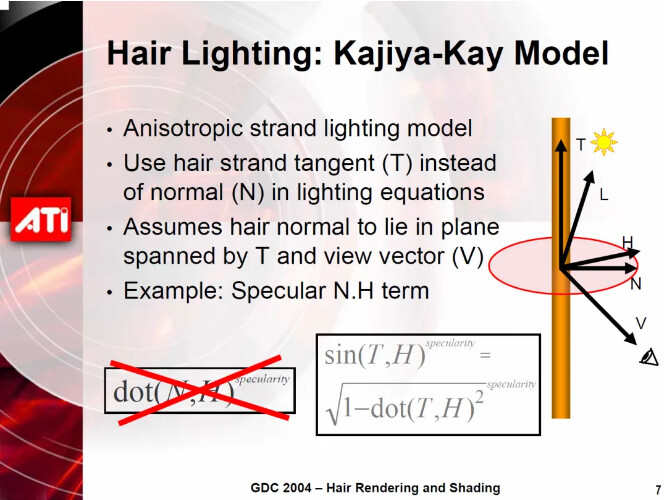 After obtaining the T vector, we continue to apply the “N·L” method as we have done, which requires obtaining the projection of T on the half vector. This projection is actually the sine of the angle between T and N, and the dot product can only get the cosine of the angle between the two. Fortunately, we can get the sine by conversion through the law of sine and cosines:

In the above code, cc_matView and cc_mainLitDir have already appeared in the skin section, and they return the View Matrix and the direction of the light source, respectively.

These all seem relatively simple. Then the question is: how do we get the vector T? 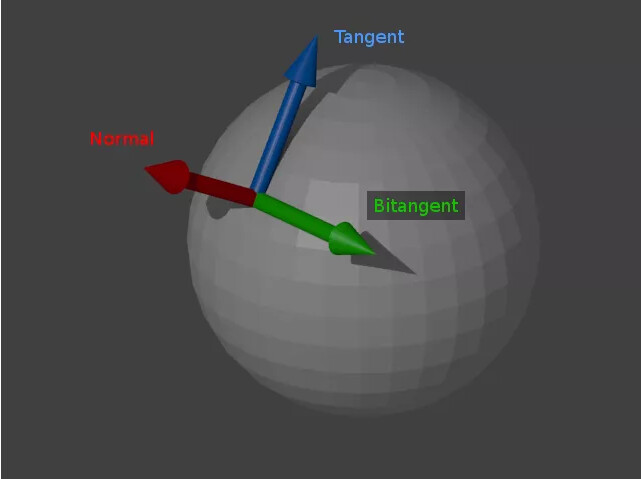 In fact, in the PBR shader of Cocos Creator, the secondary tangent vector has been calculated for us, and we can use it through v_bitangent.

Next, we need a grayscale image of the hair as the weight of the stretch. This grayscale image can be a texture using hair model UV or a continuous texture. If it is the latter, we have to write the corresponding UV Tiling function for it.

We declare a vec4 parameter anisotropyTile and use it to realize the UV control function. v_uv We have used it in the skin article, and what is returned is the UV data passed by the vertex shader.

We first multiply the normal data with the weighted grayscale image and disturb the normal direction. In addition, we also need to add a custom parameter of displacement weight. The meaning of this parameter will be reflected later. Then add it to the secondary tangent vector. This is the same as the way we obtain the H vector. After normalization, we get the half vector of the secondary tangent vector and the normal direction vector after the disturbance.

After obtaining our T vector, performing dot product calculation, converting it to a sine, and substituting it into our simple Specular formula, the anisotropic highlight will come out. We also use GLSL’s smoothstep function, similar to the mix function. It will project the input parameters into the defined minimum and maximum interval and generate a smooth transition curve between the two extreme values.

Now, Specular has basically followed the direction of the hair, but our highlights seem to be too strong. This is because we did not consider the issue of mutual shading by the hair itself. It is very easy to solve it, as long as the AO of the hair is superimposed on the highlight.

Finally, there is the link of linkage. Recalling the reference image we observed, we need to use the anisotropy function we wrote to generate two highlight bands. Remember the displacement parameters we wrote when we disturbed the secondary tangent vector? Bring different displacement parameter values (hairSpecMOffset, hairSpecAOffset) to the two highlight bands, respectively, and they will not overlap each other. You can move the highlight to a place where the model has a higher degree of curvature to obtain a more realistic effect. In addition, they have their own intensity parameters (hairSpecMAmt, hairSpecAAmt) and color parameters (hairSpecColor01, hairSpecColor02), and we can also give a total intensity for overall coordination (hairSpecIntensity).

In this step, our anisotropic highlight function is basically ready, but we have encountered a similar problem to the skin article: which channel do we output the highlights?

The appearance of the hair

Our shader has been written, but our work is not yet complete. How to use this shader to show the best effect?

Create a new material and give our anisotropic shader—set technique to 1-transparent.

Turn on USE ALPHA TEST and use the alpha channel to eliminate unwanted pixels. Here you can use the red channel or alpha channel to adjust the culling threshold to make the “cutout” cleaner. 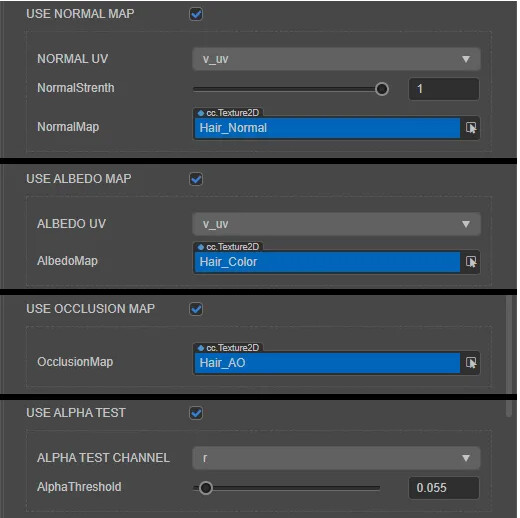 After this step, the hair should look like it should be. However, you will find that the relationship between hair seems a bit strange. You need to expand the PipelineStates tab at the bottom of the editor, turn on DepthWrite under the DepthStencilState tab, and make sure that DepthFunc is set to Less.

Of course, by default, the back of the model will not be rendered. If you need to achieve the effect of double-sided material, set CullMode under RasterizeState to None.

With this, the classic Kajiya-Kay model hair shader that we reproduced in Cocos Creator is basically completed.

In the next chapter, let’s give the characters a pair of eyes.