Probably the most comprehensive Cocos Creator DrawCall optimization guide you can find so far!

In game development, DrawCall, is a very important performance indicator, it directly affects the overall performance of the game.

Whether it’s Cocos Creator, Unity, Unreal or some other game engine, as long as it comes to game performance optimization, DrawCall is absolutely indispensable. What is a DrawCall? Why is it necessary to reduce DrawCall whenever possible?

DrawCall is a behavior (instruction), which is, the CPU calls the graphics API and instructs the GPU to draw graphics.

In fact, what we really need to reduce is not the DrawCall behavior itself, but to reduce some performance and time-consuming behaviors before each DrawCall.

The general flow of the graphics rendering pipeline is as follows:

Note: The above figure is only a partial summary of the rendering pipeline, which is convenient for everyone to understand. The actual graphics rendering pipeline is more complicated and beyond the scope of this article.

Note: It can be seen from the figure that in the rendering pipeline, before each DrawCall, the CPU needs to do a series of preparations to allow the GPU to render the image correctly. Every CPU read/write, data processing and rendering state switching will bring certain performance and time consumption.

Whose work is it?

Generally speaking, the GPU rendering image speed is actually very fast, so the time consumed for drawing 100 triangles and drawing 1000 triangles is not much different.

But the read and write memory of the CPU, data processing, and changing the rendering state of the GPU rendering is very, very slow.

The actual bottleneck is on the CPU side. A large number of DrawCalls will make the CPU so busy that it will be overwhelmed, and the GPU will spend most of the time waiting, which is the main reason for the decline in game performance.

The fewer DrawCalls, the better.

How to reduce DrawCalls?

When the game is running, the engine needs to render images from the top to bottom of the screen as well as in the order of the node hierarchy. So, in theory, a DrawCall is required for every image rendered (text is ultimately an image).

In this case, as long as we find a way to render as many images as possible in one DrawCall (also known as a rendering batch), we can call the CPU as little as possible, thereby reducing the amount of DrawCalls.

So we need to reduce the number of times the CPU works, but give it a lot more work every time, so you can save some steps on the CPU preparation and work requirements and hand off the work to the GPU processing. The cost is of having the CPU working all the time will take more time if more requests are asked for.

After understanding this principle, let’s see how we put this into actual game development.

The final static image is an integration of a series of smaller images into one big picture during development.

The most important thing is to try to pack adjacent fragments under the same interface (UI) with the same rendering state into one atlas to achieve the purpose of reducing DrawCalls.

Remember that the game is rendered in-order. So rendering adjacent items is very important!

For example, think about a pop-up window consisting of 10 parts and 1 text (assuming that they all use the same rendering method):

If you don’t understand the above example, please continue to read the following. I believe that you will get a better understanding of this article after reading the entire content of this article.

The dynamic combination picture and BMFont will be mentioned later.

Of course, the above example is considered to be an ideal situation. The actual problem may be more complicated, with more sprites and texts, and it may not be possible to pack all image resources into one atlas. Therefore, we can only optimize as reasonably as possible to avoid the situation over-optimizing.

It is not recommended that the size of any image resources exceed 2048 * 2048, otherwise, there may be problems in small games and native platforms.

And the larger the image size, the longer the loading time, and it is a non-linear growth. For example, loading one image takes longer than loading two images, and the gain is more than the loss.

Here are two ways to package a static atlas:

Here is the introduction of Dynamic Atlas that comes from the official document:

Cocos Creator provides a static atlas packing when building a project - Auto Atlas. But when the project grows bigger, the texture will become so much that it’s hard to package the textures into a large texture. At this time, the static atlas packing is more difficult to meet the needs of reducing DrawCall. So Cocos Creator added the Dynamic Atlas, featured in version 2.0. It dynamically merges textures into a large texture while the project is running. When rendering to a texture, the Dynamic Atlas Manager will automatically detect if the texture has been merged into the atlas (Collection of images). If not, and the texture conforms to the Dynamic Atlas condition, then the texture will be merged into the atlas.

Dynamic Atlas is according to the rendering order to determine whether the texture is merged into a large texture. This ensures that adjacent DrawCall can be combined into a single DrawCall (also known as Batching).

To put it simply, after the dynamic combination is turned on, the engine will help us to combine the images that meet the conditions (that is, the size is less than the maximum size of the image limit) at runtime, achieving the same effect as pre-packing the atlas.

In the Cocos Engine, Dynamic Atlas has a maximum size of 2048 * 2048, the combined maximum size limit of textures are 512, the user can modify the following API:

In addition, it is necessary to ensure that the Premulyiply Alpha, Wrap Mode, and Filter Mode of the texture are consistent with the dynamic atlas in order to be dynamically batched. 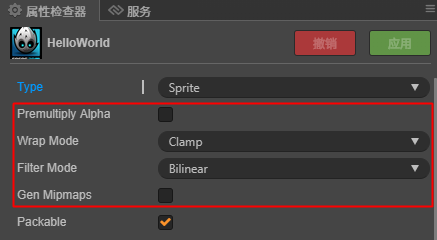 It is mentioned in the official document of dynamic combination:

But in fact, as long as a static texture meets the requirements of a dynamic Atlas (ie size smaller than the maximum size limit), also can participate in Dynamic Atlas.

Note: Auto Atlas needs to enable the Packable option under the Texture column in its property inspector panel, which is disabled by default. 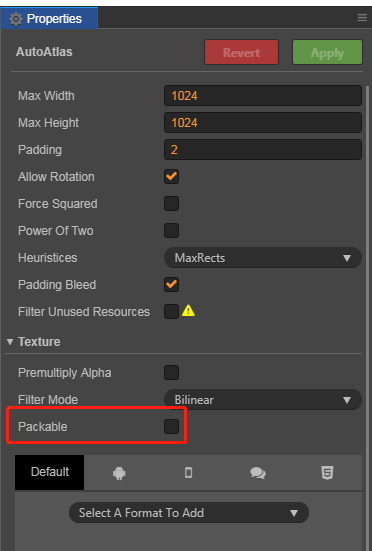 Only the sprites with the Packable option enabled for textures can participate in dynamic image combining, which is enabled by default. 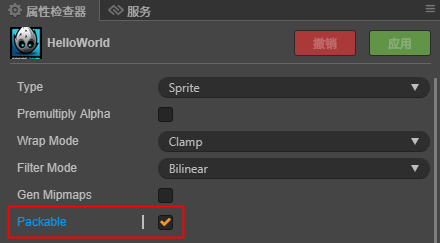 Note: If you need to use a custom Shader for the sprite, you need to disable the Packable option of its texture.

You can also disable this option in the code:

Labels that use system fonts or TTF fonts in the scene will interrupt the rendering and batching, especially when the Label and Sprite are stacked and interlaced. Each Label will interrupt the batching and add a DrawCall, which is a problem when a scene has a lot of text.

For the game’s text, in particular numbers, letters and symbols, it is recommended to use BMFont to replace the TTF fonts or system, and BMFont can be packed into the same atlases (or open the dynamic Graph), making them exempted from most of the text that would result in an additional DrawCall.

For example, there are 80 sprites and 80 texts (system fonts) interlaced in a scene. The node hierarchy is as follows: 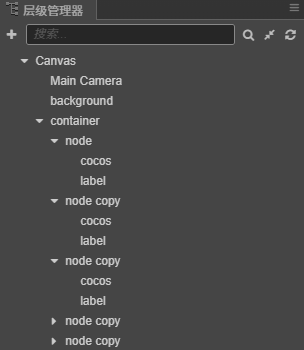 After running it, you can see that in the Debug section in the lower-left corner shows that there are as many as 161 DrawCalls, which means that each sprite and text adds a DrawCall. In this case, even if the sprite opens the atlas, it will not help. 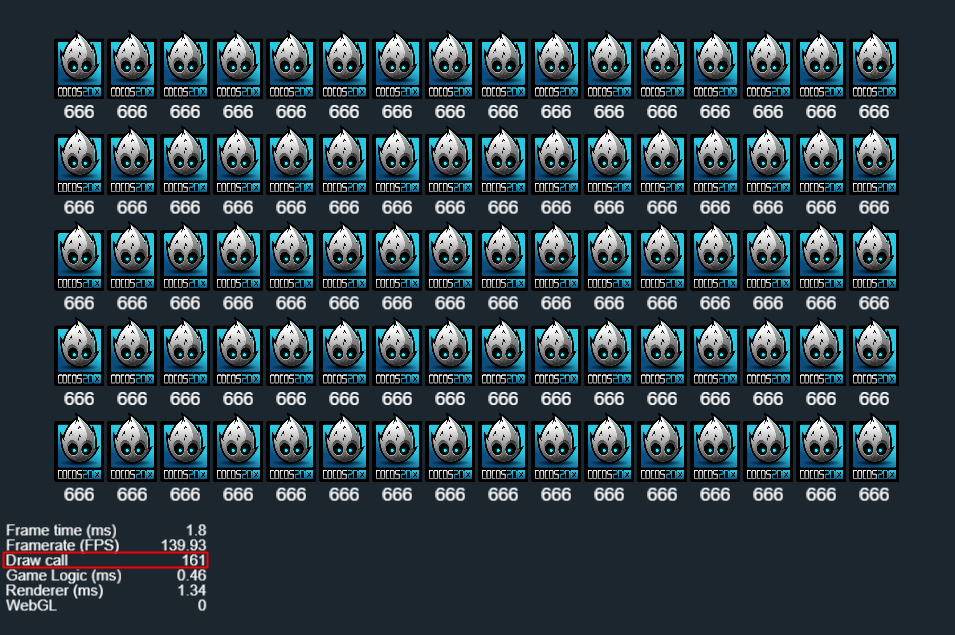 Still in the above scene, try to change the system font of the Label to BMFont and pack it into the same atlas with the sprites, the same is 80 sprites and 80 texts.

The scene only occupies 1 DrawCall, and the other DrawCall is occupied by the debugger in the lower left corner. 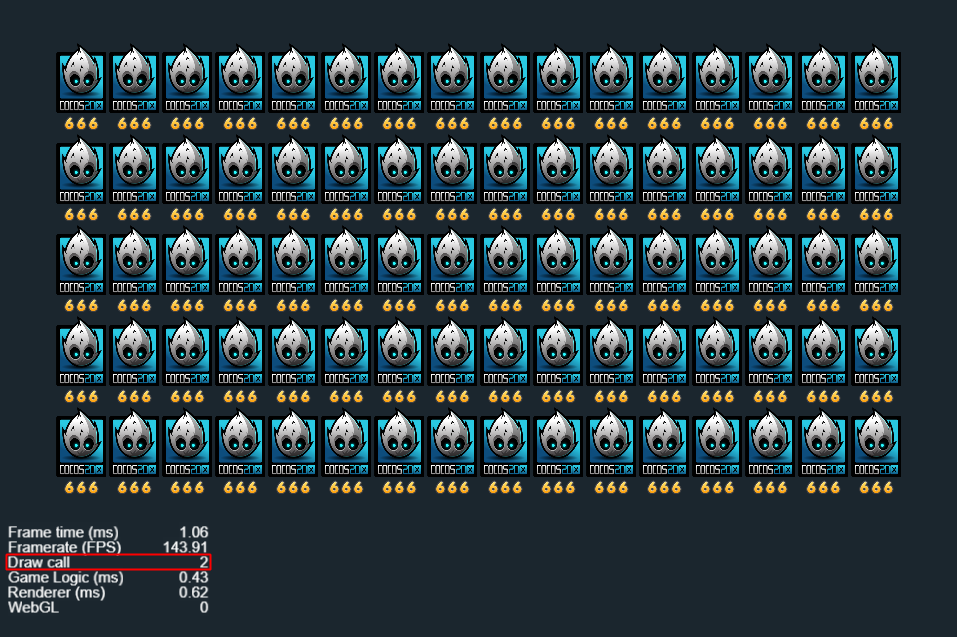 The conclusion is obvious. For a large number of frequently changed texts, the performance improvement brought by the CHAR mode is very obvious.

At the same time, the limitation of the CHAR mode is also obvious. It is generally used for a large number of digital texts in the scene.

In addition to the above optimization solutions, we can also work hard in the game scene to optimize the performance to the extreme.

In fact, also mentioned above, we can optimize the node level, separate image nodes and text nodes, text or use BMFont Cache Mode option, and more. 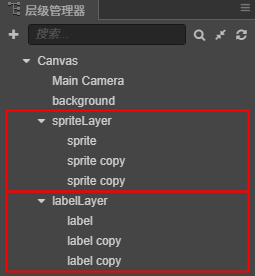 Especially for a large number of text prompts (damage value, HP value, mana value, etc.) in battle scenes or a large number of experience value texts in synthetic games, because these texts are basically numbers, even if there is more text in this way Only one DrawCall needs to be rendered.

In the following scenario, the text is turned on in CHAR mode, and the script is used to generate about 50 random numbers per second. The text nodes are unified under the labelLayer node, so that all text can share 1 DrawCall, and the background and Cocos logo occupy one as well. The corner debug occupies one as well.

It can be seen that even if there are so tons of texts in the scene instantly, the overall performance is still quite impressive.

In this example, the engine generates a global shared bitmap (BMFont) containing the numbers 0 to 9 for us at runtime.

Of course, it would be better if BMFont can be used directly in Label.

Last but not least

In the version before Cocos Creator 2.0.7, changing the color or transparency of the node, and using the slice of the Sprite component will interrupt the rendering batch.