So far, from Part 1, Part 2, Part 3 and Part 4, we have our Bird, we can make it appear to fly in a colorful world and we have written code to start to make our game playable.

First, our game needs to respond to touch events in full screen, so we need to find a node that covers the entire interface. Perhaps, the Canvas node meets the requirements?

Second, create a BirdControl script and attach it to the Bird node to specifically control the bird’s game logic. 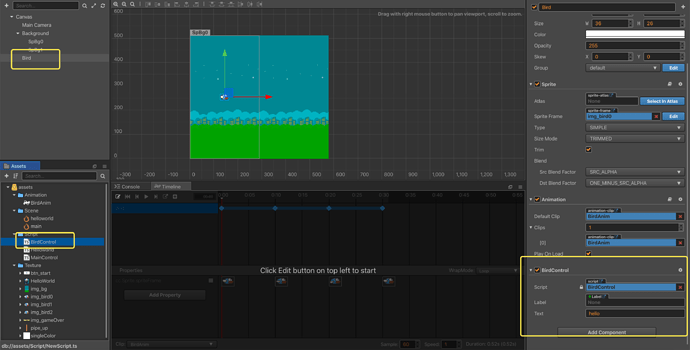 As shown above, after the script is attached. Next, double-click the BirdControl script to edit it:

The second piece of code, the onLoad() function is one of the life cycle callback functions provided by Cocos Creator. This callback function is triggered when the node attached by the script is activated for the first time. It is generally used to perform some initialization related operations. Line 24 is to add a touch event response to the Canvas node.

Let us talk about the parameters being used:

cc.Node.EventType.TOUCH_START - As you can see from the name, this event is when the touch starts.

this.onTouchStart() is our custom callback function.

this, is used to bind the caller of the response function. This parameter is important and must be provided.

The fourth piece of code, the onTouchStart() function is our custom touch callback function. This function will be triggered when the mouse clicks on the game area. Each time this function is triggered, we increase the upward speed with a speed value of 2.

Save your changes in the text editor that you are using. Find the Save button in Cocos Creator and click Save once.

At this step, run the project. You will find that every time you click, the bird will fly up a distance.

The implementation is simple, the code is as follows:

Save your changes in the text editor that you are using. Find the Save button in Cocos Creator and click Save once.

At this step, our tutorial is taking shape.

Stay tuned for Part 6 of this tutorial!

To HuJun for creating this tutorial.