Tested it with both, but still not works.

you can test with our admob sample https://github.com/sdkbox/sdkbox-sample-admob

I know why not show ads.
I have to add third party mediations…

I use Win-7, building on it C++ Cocos projects for Android.
Thanks for the rewarded video support start, but…

One my problem - my sintax error in Resources\sdkbox_config.json (missed or extra comma).

Another Resources\sdkbox_config.json problem - seems it’s not working without describing all 3 types of advertising (banner, interstitial and rewarded video) - may be because admob::init() automatically tries to load all 3 types of Ad one by another, so i had to use fake interstitial.

Looks like even reward() of the rewarded video works ok.

Thanks for your job, developers of the Cocos!

Can you please upload your project on github or something? I can not make rewarded videos work even on sample project…

I see that you’ve updated SDKBOX to version 2.3.13.2 and added the Facebook functionality for sending gifts, but the functions for requesting and sending differ in parameters:

Could you add the title and additional_data parameters from the sendGift function to the requestGift function in the next patch for version 2.3.13 ?

I know why not show ads.
I have to add third party mediations…

How to setup sdkbox for newest created coocs project? I get an error! 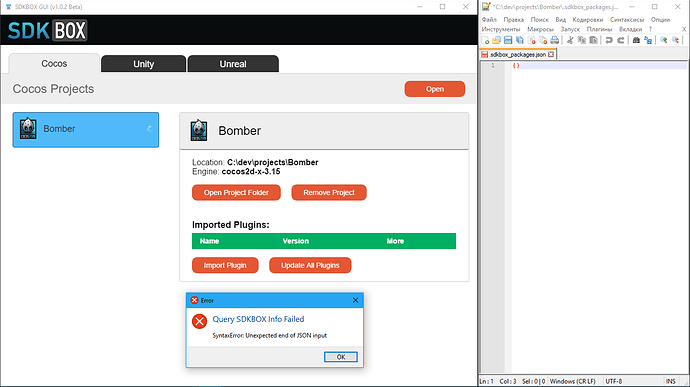 Sorry to be a bother, but I just noticed 2 more things:

When I try to use them in the JS bindings (so that I can know when the user is finished with the action), I get an error message in the android console:

From what I’ve read there isn’t much that can be done for 2) as it is most likely from the Facebook SDK and I hope that users won’t pay so much attention to it.

@nite
I integrated Admob Reward video for an ios game and its working …but how do i know whether the player has watched the full video or not?? coz it doesn’t give any messages if the video is closed in between…

Can you help me with this??

“ERROR_CODE_NO_FILL” this error means there is not enough ads in your region at the moment, maybe turn on testing ads or try it later.

Thank u for replying.

Can someone help me??
All other functions in the listener are been called except the reward function. What am i supposed to do?? Do i have to add anything in addition ??

Is here any video ? Or just pictures ?

I am getting the video…But when I close after watching it fully… I am not getting any logs that i have given in reward function.