I’m trying to pilot a spine animations with an animation graph without writing code in the 3.5.2 version.

I saw that the property _animationindex of a Skeleton is animatable in an animation clip, but it doesn’t seem to play the animation.

Is there any other way to use spines with the built-in animation system without writing code ?
If not, is there any plans to integrate it in the future ?

We have no plans to integrate it in cocos creator, which currently supports the JSON and binary data formats exported from Spine, you can use spine’s official tool to export.

To clarify, I don’t want to edit spines directly in cocos. I want to trigger the animations of an already imported skeleton in an animation graph instead of having to write code for it.

I want the graphic designers to be able to integrate their animations in an existing state machine without the intervention of a dev.

Let’s say that you have this very simple animation graph : 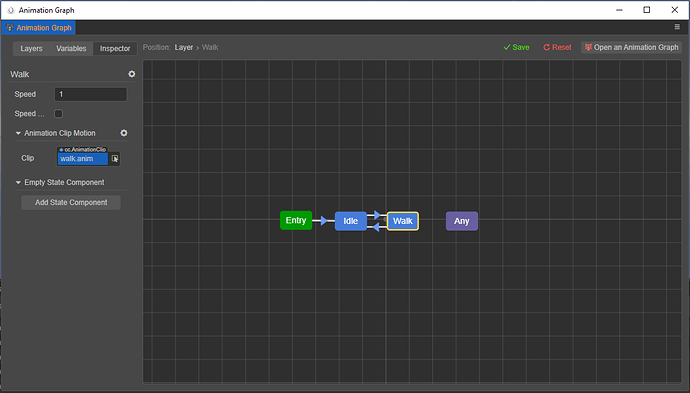 Currently what is binded to the states are animation clips.

Is there a way to trigger an imported skeletal animation in those clips ?

I know I could do it by code in a StateComponent, but I want the whole process to stay in-editor for the artists to do it themselves and avoid code duplication.

I transferred this request to our animation team

If you’re using 3.6, you could try the emdedded player feature by which you could for example play another animation clips in a skeleton animation.

From what I see here [Ver.072922 Updated] Cocos Creator 3.6.0 Community Beta , emdedded player feature seems to indeed be what I seek.

Thank you, I will wait this next release.