I am making an 8 bit game.
I am looking for a shader that creates a border on a Sprite.

Here is the output I want exactly.

But it is written in Unity shader.
Is there a way to use this shader in cocos2dx?

This post will demonstrate how to add outlines to sprites in Unity using a custom shader and component.

I’ve applied the similar shader in this article, but the texture is smaller and not applied to some corners.
If I can’t use the Unity shader, how can I fix the bug in the shader below?

Okay now I can see something working, but in bad way. However I’m not getting any errors. Before: [image] After: [image] As you can see it got a lot smaller and also it’s misplaced by quite a distance.

This post will demonstrate how to add outlines to sprites in Unity using a custom shader and component.

And then you just tweak the outline shader from cpp test to become like the unity’s one
(using up, down, right, left textureCoordinate offsets instead of ‘radius’).
Do note that texelSize does not come built-in for glsl, you will have to pass it in as a uniform.

Thank you for answer!!
I will try it and post result.

I modified the shader to get the result I wanted.
However, this method has three problems.

Nice, it is looking good~

1). You can do a conditional check similar to this. Check surrounding 4 pixels’ alpha and maybe use the lowest non-zero value?

2). Sorry i am not sure what this means, perhaps a screenshot might explain better?

3). The unity shader is using TexelSize instead of radius, which is 1 / TextureSizeInPixels. You can refer to this shader example which is doing something like that

There are still a number of problems, but this is a good shader.

Below is full source.
OutlineTest.zip (19.7 KB)

ok, i’ve just taken a look at your shader code.
you are still using the same method from cpp test, only changing the texture offset values.

If you change the shader to be like the unity one (in my first post), it will work differently. It will replace the colored pixel at the edge with outline color, instead of outline on the transparent pixel.

except that it multiplies with IN.color, which is equivalent to v_fragmentColor
and as such it has already factored the opacity.

As you see, the very last part of the shader before returning the final color, it multiplies by the opacity that was factored in the first part, so there won’t be any issues with the opacity.

You should change the accumulate method to be using 4 different variables instead (for each of the surrounding pixels).

And instead of this, rgb should not be multiplied by alpha, while accum.a should be the max of the 4 pixels’ alpha.

there must be some extra space in the texture… okay 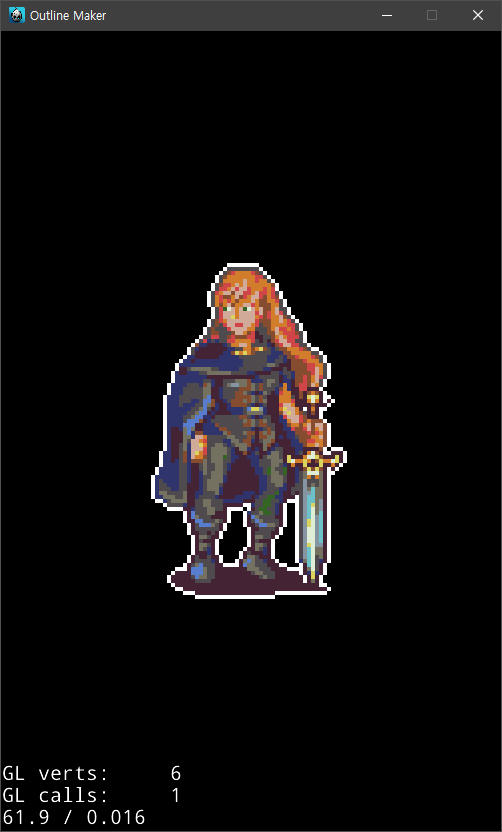 Shader now works fine!
Thanks for the solution to the problem.

In solving this problem, I realized that the glsl code is called for each pixel. Did I get it wrong?

Yes, fragment shader is called for every single pixel.