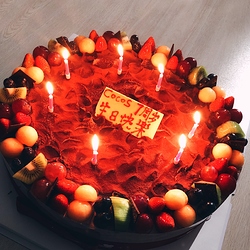 To our Cocos users, partners, and contributors:

Today is a very special day. Seven years ago, we released the first version of Cocos2d-x on December 1, 2010. Today we are fortunate to have received a pre-A round of funding that brings the valuation of our engine to 10’s of millions of dollars. Xiamen Yaji Software, the company behind cocos, is spin-off from Chukong Technologies for further growth. This is all inextricably linked with your long-standing support and trust of our company and it’s products. 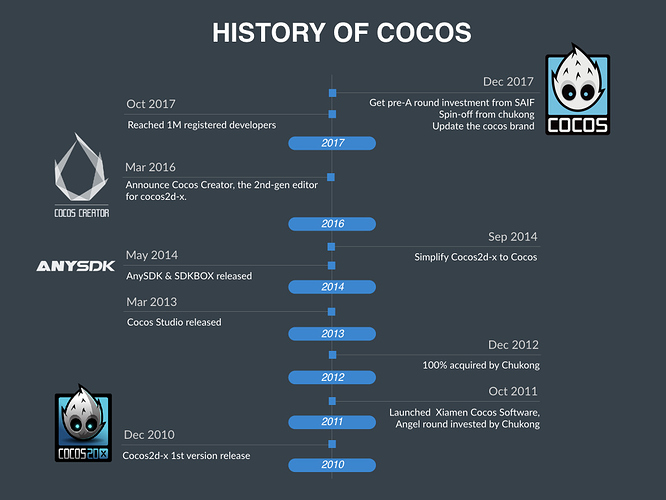 First, I want to sincerely thank all of our engine users, new and old, including our friends who used it, loved it or hated it, criticize it or contribute to it. We have reached 1.07 million registered developers by the end of this November. It is you, the developer, who has helped bring tens of thousands of exciting games to the world and created more than a billion dollars of industry value. Today the Cocos engine has 45% market share in China as #1, and 18% market share globally as #2 at mobile engine area.

Second, I want to thank all of our partners. Tencent QQ space, QQ browser, QQ games lobby, Facebook, Qualcomm, Google, Microsoft, ARM, Intel, Huawei, Samsung, Migu and China Mobile. Thanks to these giants, Cocos can stand in an international arena, these successful experiences have given Cocos the chance to dance with world-class companies. 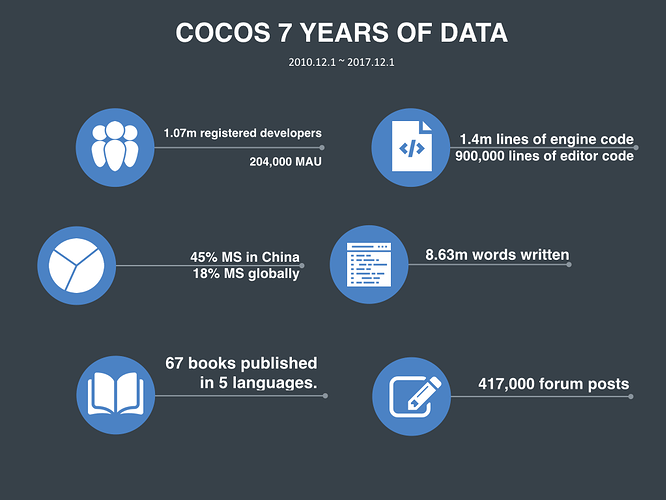 Third, thank you to the investors who fully supported the growth of Cocos engine’s technology. A thank you to Haozhi Chen, Qualcomm, Gungho and the board of Chukong Technology for being firmly committed to the Cocos engine . I haven’t always been a CEO. It is with their help that I was cultivated from a programmer to this challenging leadership role. Thank you to the SAIF Fund for its trust, this round of financing is an important milestone in Cocos engine’s re-recognition in the capital markets. The engine team will use this investment correctly, to attract more top employees, raise the engine technology to the next level, offer more stable versions, faster iterations, better user experiences and higher quality services to our users. We believe that, only when once our users get a satisfied service, then can our investors receive a satisfactory profit.

Fourth, I would like to thank those people who has helped with the Cocos projects. Starting with everyone who has fought for our existence, colleagues who contributed code and documentation to Cocos, the authors and publishers who published tutorials and books, and friends who used to be active in forums to answer questions. The saying: “it takes a village” applies to our growth.

In 2018, Cocos will release Cocos Creator 2.0 and Cocos2d-x 4.0 major releases. Creator 2.0 will apply some of the latest advances in 3D technology. In particular, the refactored new renderer will greatly enhance both performance and advanced features of our Engine 2D, exceeding Pixi’s in-house developed test data. It will also achieve the world’s highest performance for the HTML5 game engine. Native renderers for C ++ are also updated, and the renderers for Cocos2d-x v4.0 will stay in sync. The first version of Creator 3D will be proved viable first by an internal game and is likely to begin beta testing during Q2 ~ Q3. The Cocos2d-x framework will remain a permanent open source project, Cocos Creator will also remain free.

The Cocos engine aims to “make games easier to develop”. We hope that our technology and related services greatly reduce the entry threshold into the game industry, so that more aspiring young people in the industry can write their dream games. We have worked hard on this road for seven years and achieved some minor accomplishments. We will certainly continue our efforts in this still early stage and try our best to make a world-class game engine company that contributes to the society.

It’s great to see how cocos evolved. Hoping for great success to cocos.

Started with cocos in around 2013 beginning. Though, I’ve taken a break from making games. I’ll surely resume with my pending game in cocos after some months

What a fantastic open-source success story! Congratulations and Thanks!!

Maybe you guys should consider rebranding Cocos2d-x to just Cocos-X with what seems to be a push to support more 3D functionality in 2018?

We have reached 100 million registered developers

Is it 100 million or 1 million? Because in the infographs it looks like 1 million.

Maybe you guys should consider rebranding Cocos2d-x to just Cocos-X with what seems to be a push to support more 3D functionality in 2018?

Yes, we already rebranded to “cocos”, and have the domain cocos.com.

The number of registered developers is 1 million. Jason perhaps make a typo here.

The number of registered developers is 1 million. Jason perhaps make a typo here.

I did, indeed. Wishful thinking, I guess. Corrected.

Congrats cocos2d-x and team!! Hope to see you growing more & more in the years to come!

Whats the difference between cocos.com and cocos2d-x.org ? is cocos just for use in china ?

Yes, that is the distinction. Perhaps in the future things will merge.

Happy birthday! Glad to hear of the new investment and super keen to see what’s on the roadmap for Cocos2D-X in 2018