In the upgrade guide (https://docs.cocos2d-x.org/cocos2d-x/v4/en/upgradeGuide/) it says “V4 only works on those devices that support Metal for iOS/macOS platforms.”

Does it mean there’s no fallback to opengles for older devices?

I’m working on updating our project from v3 to v4 and need some help with the migration.
This project runs on iOS, android and mac.
Current setup for v3 is this:

Root folder for the project is myProject/ which was generated with cocos new command, inside there are different folders for each platform project like proj.android-studio/ and proj.ios_mac/ among others.
Right now myProject/ is a git repo and has cocos2d-x added as a submodule, this submodule is located in myProject/cocos2d/. The cocos2d submodule is our own repo forked from cocos2d repository on github.

I’m following the migration guide at https://docs.cocos2d-x.org/cocos2d-x/v4/en/upgradeGuide/migration.html
Our case being scenario 1, where we currently have a game running on v3.

My first step for migration was to fetch v4 from upstream and create our local branch for v4 and checkout it. No problems here.
Then the guide says to generate the different projects. I start with mac and iOS first so I generate both projects.

Here’s my first doubt, the guide says (using mac project as an example):

I’m probably missing something obvious but I’m a bit lost since I have two different cmake generated projects now (ios and mac).

Do I have to create a new project for each platform my game runs on? Atleast for ios and mac I’m lost at which one would be the correct cocos2d_libs to add to my game project.

edit: from reading previous posts it seems I should create ios-build/ and mac-build/ inside myProject/ and not myProject/cocos2d/. However I still don’t understand how to work with both the mac and ios generated projects while migrating my v3 game.

Yes. You can use V3 if you want to use opengles.

It doesn’t matter where to create the build folder. You can follow step 3 to specify the build directory.

Do I have to create a new project for each platform my game runs on?

I’d have to migrate my current project and have it either be ios or mac and then create a new project for the other platform?

@coulsonwang What about this fix? I see it has not been integrated.

=====
And one new thing. It seems there is memory leak. Take a look please at the

_indexBuffer reference count is equal 2 here, since it is retained at the

===========
Little desire if you wish.
Potentially it would be convenient to allow backend::Buffer::updateData(void* data, std::size_t size) to recreate backend dependent buffer if updated buffer size more than allocated. Now it only has assert about this.

Yes. CMake do not support configure multiple platform targets in a project. So it is a bit difference with V3.

What about this fix? I see it has not been integrated.

It had merged now.

And one new thing. It seems there is a memory leak.

Yes, the indexBuffer needs to be ‘autoreleased’. Fixed in PR 20423.

Now it only has assert about this.

As the updateData literal meaning, it just update datas. I think it’s better to resize the buffer somewhere outside.

Yes, the indexBuffer needs to be ‘autoreleased’. Fixed in PR 20423.

Autorelease is useful when cocos2d library creates some object which user can forget to retain himself. For example look at the end of

I believe that this is extra cpu cycles to do indexBuffer autoreleased, since it is added to the indexdata.

and indexdata is autoreleased.
indexBuffer is added to the indexdata from outside and it should be retained in this case.
I apologize, your fix is well!)

@coulsonwang Could you check please the following functions:

Looks like there is needed CC_SAFE_RELEASE for _vertexBuffer and _indexBuffer.

@zhangxm When will next cocos v3.x releasing?

The _vertexBuffer and _indexBuffer will be released in the CustomCommand destructor.

@coulsonwang They will be released in destructor when whole object deleting.

As the updateData literal meaning, it just update datas. I think it’s better to resize the buffer somewhere outside.

I see only one approach to achieve this goal. Exchage Sprite3D::_meshVertexDatas[i]::_vertexBuffer and Sprite3D::_meshVertexDatas[i]::_indexs[j]::_indexBuffer through the outside addition Sprite3D interface with some new buffers with updated data’s.
But now I can’t properly remove the corresponding buffers, since they were caught by the MeshCommand while performing the following function:

It is called each frame, and according to the CustomCommand::setIndexBuffer/setVertexBuffer
, the older indexBuffer/vertexBuffer will cause memory leak, if they were changed.

Besides Take attention that CustomCommand::setIndexBuffer/setVertexBuffer are public interfaces in any case. They can be used in many other contexts.

I’m making this post incase anyone else is having trouble with this.

I’m currently creating a new project using v4 and setting up everything using cmake and learning as I go.
Project is created fine with cmake and compiles both for mac and iOS, however on iOS project I noticed only iPhone device comes checked by default.

Obviously you just can’t check iPad from xcode… you have to somehow make cmake set this for you.
From https://github.com/cocos2d/cocos2d-x/blob/v4/cmake/README.md it says:

All this information is held in the Info.plist file that is part of the app’s source files and is therefore not generated by cmake . Therefore you can update these values from the General page of the Xcode target and the values will be preserved the next time you regenerate the project from cmake :

However I could see Info.plist wasn’t being edited so after deleting and regenerating the project with cmake I was back to having only iPhone selected.
After trying cmake stuff with no luck I did some googling and found this:

This file has been truncated. show original

From here I gathered

was what I needed so I added the following line to my CMakeLists.txt:
set_xcode_property(${APP_NAME} TARGETED_DEVICE_FAMILY "1,2")

This works fine, regenerating the project has both iPhone and iPad selected.

I think nearly everything works now (all platforms, sdkbox, c++17) I had one issue in one of the old posts: CMake GUI to generate iOS project Where the CMake build resulted in displaying the app with an incorrect size (on my ipad), with my bad obj-c knowledge it turns out there is an option in XCode to set the app to IPhone,IPad and Universial :o [image] The default proj.ios_mac XCode project has this…

Why does the android studio project come generated? Shouldn’t we generate it using cmake as with the other platforms?

Also, should we open it as a new project or use import project form android studio? 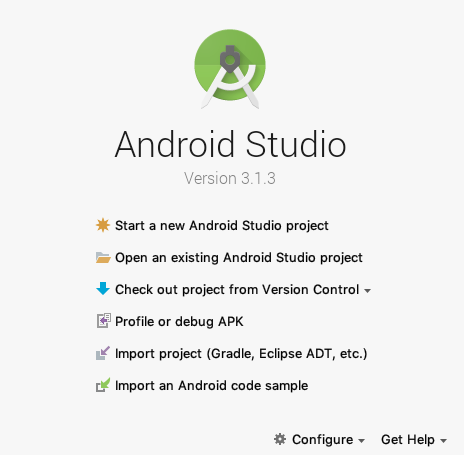 What’s’ the correct/preferred workflow when using cmake and version control when working as a team?

For example: I create some new source files in xcode, add them to CMakeLists.txt and push the changes to a git repo. Someone else fetches the changes, merges and then has to regenerate the project. This has to be done each time someone adds new files to the project… it seems cumbersome. I’m sure there’s some way to automate part of the steps (regenerating project when CMakeLists.txt has changed for example).

Android project isn’t working for me

This is after creating a new project with v4 and opening proj.android/ in Android Studio 3.1.3
Gradle project sync fails with error:

Is giving error since gradle symbole can’t be resolved.