The Cocos Creator team has worked hard to release v2.2.1. A big THANK YOU! to all the developers that upgraded to previous versions of v2.2 and provided feedback to help continue to make Cocos Creator a preferred tool is creating multi-platform games. Your encouragement and feedback keep us motivated and provide confidence to make the decisions to move Cocos Creator in the direction to become the number 1 choice in game development environments. Cocos Creator allows developers to enjoy creating amazing games and distributing them to a variety of platforms. Cocos will, as always, optimize the performance and user experience of our products.

This release brings a large number of experience optimizations, defect repairs, and performance optimizations. At the same time, support for Alipay Mini-Games has been added.

It is recommended that all developers upgrade after performing the necessary technical evaluations and after upgrading their existing projects for safe-keeping. Please do not skip these steps.

Mini-Games are insanely popular and many platforms are starting to support them. This opens up many new revenue opportunities. Alipay, an e-commerce giant recently added support for mini-games. Cocos Creator v2.2.1 is the first platform to release support for Alipay Mini-Games. For more information, please refer to《Alipay Mini-Games》.

The game engine plug-in is a new feature of WeChat version 7.0.7. This can greatly reduce the download time of games. This plug-in is now integrated into Cocos Creator v2.2.1 as part of the environment and will be more convenient to use. Developers only need to check Allow engine separation in the Build panel, and then build the release normally, without any other manual operations.

I was able to build my Android *.apk without “intelliJ IDEA”! The gradle.project was compiled just with CC 2.21. This is great ! I dont know why i wasnt able to do this with the older release CC 2.12. Anyways. Now it works.

Also there seems to be a prob with label set to = CHAR ! As you remember “CHAR” is very important for performance. Somehow it is broken in this release, i guess. Does anybody has the same problem ? The text simply disappear. When i switch to “none” or “bitmap”, the Text appears correctly.

And the last thing: compatibility. It is not completly compatible with your CC 2.12 Projects ! Even not with CC 2.20. Check this out, f.e.: https://github.com/2youyou2/TheAviator

This few facts makes me a little bit sad.

We can ask @jare to help us out. @sledgehammer

Would be super, if someone could investigate into this few things i mentioned.

Hi friends,
I need to make a simple 3d project for my client.

I want to make a simple camera orbit setup in Cocos Creatoe v2.2.1
I have a model in center of the scene.
I put a node named “Cam_X”. I put another node named “Cam_Y” in “Cam_X” to rotate two axis independently like a gimbal.
I put camera at a certain distance from the center into “Cam_Y”. 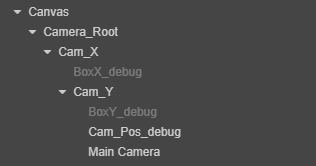 So I thought I can control rotation of nodes to orbit camera around center like this:

I put a dummy cube to at the position of camera and it seems wrk well:

But when I put the camera then it goes crazy about angles:

Here is the update function:

How can I fix this or how can I make a simple orbit camera?
Thanks.

@slackmoehrle do you have any suggestions my friend?

What you are doing seems to make sense to me, so why don’t I ask @jare to have a team member take a look at your images and code.

Don’t we have any suggestions?

I apologize @FocusCreative. The team will reply soon.

Hi, you should use node.lookAt(where) to control the camera orientation. This will make the camera roll stable.

Thanks my friend, yes I did it as you described and it worked. But I just don’t understand why node transformation is not working as expected for camera?

Another thing that I noticed on 2.2.1 is it creates a Main Camere node automatically in Canvas if I remove it. Isn’t it possible to use a camera outside of canvas or in some of childrens?

It’s due to the object axis, rotation will change axis simultaneously.

Another thing that I noticed on 2.2.1 is it creates a Main Camere node automatically in Canvas if I remove it.

Sorry we can’t reproduce the issue. Please give us some more detailed information or a step by step video, thanks.

Here is a video to reproduce the issues: