We strive to make your games work well on each platform. The Cocos Creator v2.2 update is the first time Cocos Creator has surpassed Cocos2d-lua in native speeds, while also significantly improving native performance! Cocos Creator v2.2 includes a number of enhancements and experience improvements, and developers of all versions are encouraged to upgrade.

In this version, we have significantly upgraded the rendering engine and achieved
tremendous performance improvements on native platforms, surpassing the speeds
of all previous versions of Cocos Creator, Cocos2d-js and Cocos2d-x.

Cocos Creator v2.2 can meet all the performance needs of every game, small to
large, simple to complex, few gaphics to 1,000’s of graphics. To help gauge performance,
low-end devices, such as the OPPO A57 and the iPhone 6S+ were used. We also
compared previous versions of Cocos Creator, Cocos2d-js, Cocos2d-x
and Cocos2d-lua to ensure we were testing in a broad spectrum, to provide the
most accurate data. The results:

In addition, Cocos Creator v2.2.0 running on iOS not only improves the frame
rate, but also greatly reduces any possibility of jittering when garbage collection
occurs. This means the actual game play experience will be really smooth. Here is
detailed performance data: 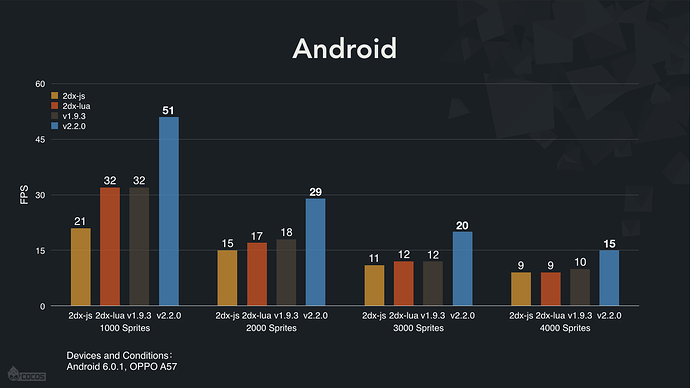 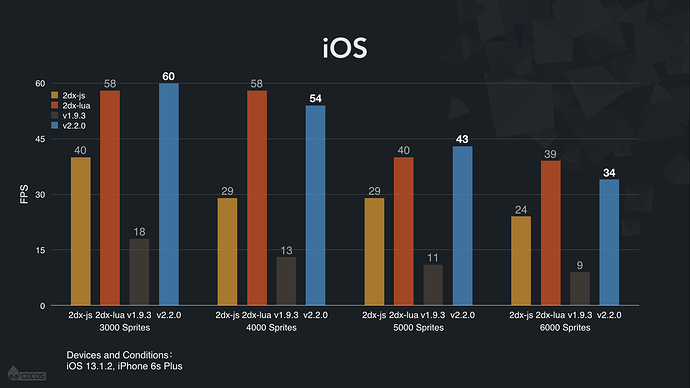 Cocos Creator v2.2.0 adds support for rendering batches of 3D models, which
effectively reduces the drawcalls for 3D games. To enable this feature, you
simply check the enableAutoBatch attribute on the Mesh Renderer and the engine
will automatically batch based on the material used, as well as the Mesh vertex
format and Primitive Type. For better optimization, it is recommended that you
enable this option only for models that can be batched and have a small number
of vertices.

Alpha channel separation format (RGB+A) for PVR compressed textures has been
added. This format uses a similar method to etc. to separate and compress the
transparent channel of the texture. After compression, the texture height will
be twice that of the original image, thus avoiding the problem of low image quality
in the conventional PVR RGBA format. 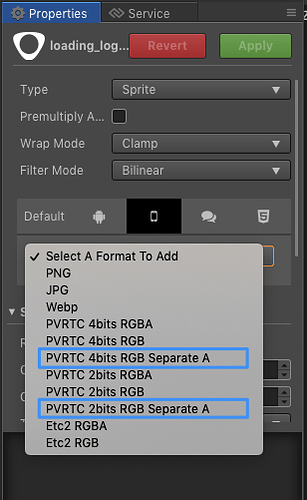 We have added an ambient light setting to the Light component for basic lighting
of 3D scenes. This is often used to solve the problem of blackout of the back surface
of the model. Just select Create Light → Ambient in the Node creation menu.
You can also add a Light component to the Node and set the type to be created
for AMBIENT.

Further improve the performance of Spine and DragonBones

Here is a breakdown of the detailed performance data: 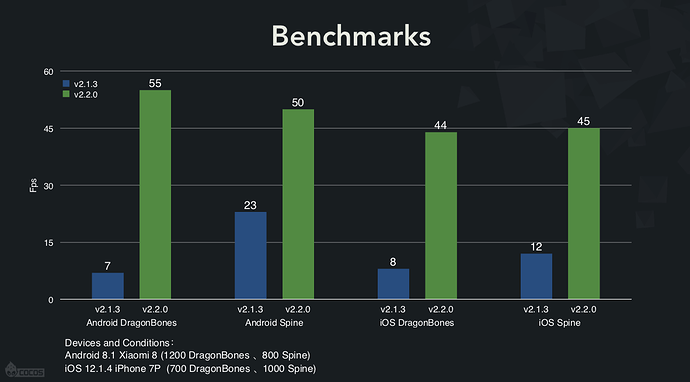 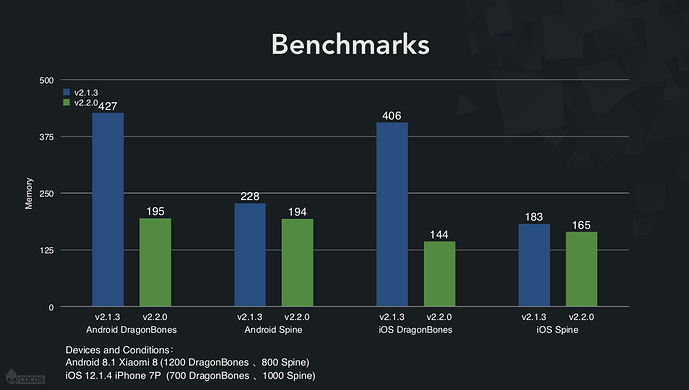 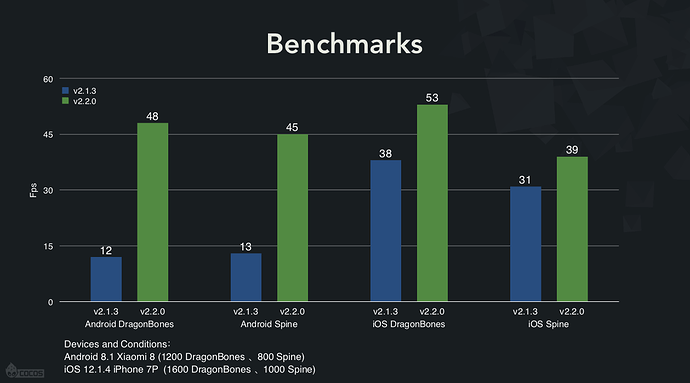 To enable acceleration mode, simply set the Animation Cache Mode to SHARED_CACHE
or PRIVATE_CACHE on the Spine or DragonBones component. For more detailed
information acceleration mode, refer to the property descriptions in the
documentation.

Cocos Creator v2.2.0 further improves the support of TiledMap. Grid rotation, grid animation, image layers, layer offsets, and object group text are now supported. Supporting multiple Tilesets in a single layer is also now possible. It also supports adding child nodes to the scene and creating an occlusion relationship with the map. And fixed the problem of rendering errors after a single map vertex exceeds 65535. For details, see TiledMap Component Reference. For details on use cases, see ShieldNode in the engine’s own example.

We added a width adjustment function to the Property inspector to solve the problem of incomplete display of attribute names on some components. Now users do not need to greatly adjust the size of the entire panel, just drag the dividing line to the right of the property name to freely adjust the split ratio.

But I have an issue now… I cannot drag assets into the assets window for some reason.
Any clue why?

Let’s ask @jare to take a look at this.

Sorry, we can not reproduce the problem. 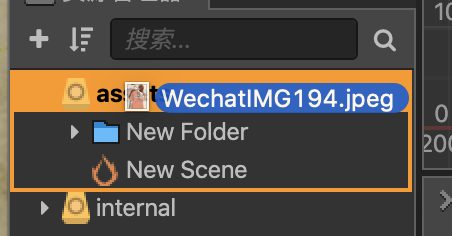 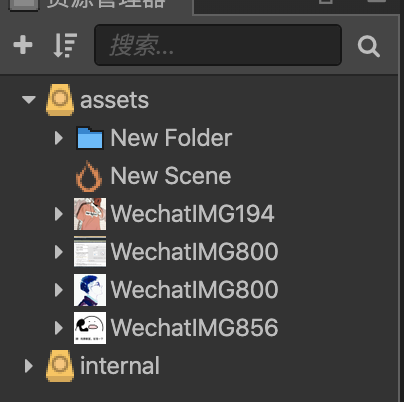 I re-install Cocos Creator and after that I set “run as administrator”. Now it works. It was strange but fixed now.

@slackmoehrle Thanks for the version 2.2.0. Is there any place that I can add for you recomendation for improvements?

Just to mention that effect/shader files have different structure now, and those needs to be updated to work with materials. Most of my shader files didn’t work until I updated them to new structure.

Also I would be good if there is explenation on Effect file in docs, how to create passes, properties, etc as there is non in the descriptions and I’m learning by testing…

Ok, so… I worked with several Game engines like Unity, Unreal, Phaser and PiXi. There are share (or common) methods that are not presented in Cocos Creator.

A lot of time we are calculating distances to set object direction.
Why we dont have this:

There are many usefull Maths out there that are very important.
I can see you implemented:

Looks like a good place to add more functionalities or maybe a new cc.Math lib?

Creator.d.ts is does not have every thing:

As I mentioned before, there are lots of common type structures that are missing here.
For example, I cannot do this in TS unless I am modifying the creator.d.ts or use :

Snap tool can be very usefull

In lots of game engines (with IDE of course) there is a snap tool that can help to place object on the grid or set objects close to others. This tool is missing but I can see in the road map that v2.5.0 will have it.

Building a custom inspector / panel is a MESS. Documentation is not strong enugh and it is not delivering the information that I need. also, We need to exit the engine and re-enter again to see the changes. And what about custom gizmos? It is in chinees too and still, there are not enogh samples to understand more complex situations.

Engine is great!!! All of you are doing a very good job!
I believe that in the next 1 to 3 years it will be a game changer… Well done.

Thanks. I’ll tag @jare so he can read this and talk to the team. Thank you for taking the time to write this all up for us. We appreciate it.

Do those performance improvements also translate to web platform, that is to running games in Chrome or Safari (on mobile) or did you focus on native?

Let us ask @jare to describe the performance on web platforms.

Any plans for making the .effect and .material format published so we can write custom shaders?
i was able to get lightmap shader implemented in 2.1.3 but am unable to migrate it to 2.2.0

I am currently working on an endless runner style game with cars, and would want to be able to write custom shaders for envmap etc.

What i would like is that we are able to create custom shaders with ease with everything from env maps to any new time based fragment / vertex shader.

i made android apk. but, it takes long time everytimes. how can i reduce compile time?

I already asked this on twitter, but I will repeat. When will you add VS 2019 support?

i believe that most of those functions exists in cocos creator.

But i agree that Creator.d.ts is not updated.

I have added LabelShadow component with ttf font. It’s working on windows but the effect is not visible on Android.