The most concerning issues and improvements from the community have been addressed, including:

Node instantiation is an essential operation in game development. Even if there are mechanics such as node pool to help reducing instantiation by looping the nodes, the efficiency of instantiation is also related to the waiting time when the scene is loaded and initialized.

In 1.4, we optimized the instantiation operation by precompiling the CCClass constructor to speed up the creation of Class; In the native platform we achieve more than 80% performance improvement, in other platforms the improvement is also more than 50%. In addition to the huge performance gains that can be enjoyed during runtime, this optimization also dramatically increases the speed of opening complex scenes in the editor.

Also for the Web platform, we also merged the cocos2d-x 3.14 version of the important optimization, including:

Using mesh rendering to enhance the animation has become increasingly common in Skeleton animations. In 1.4 version we upgrade Spine and DragonBones runtime library to the latest, now in the WebGL rendering mode and the native platform can display mesh perfectly.

UI has a major performance improvement in that bitmap fonts can now participate in batch rendering with other bitmap font and sprites! The principle of bmfont batch rendering is the same as that of Sprite, which is to share the same texture and do not have something with different texture renders in between.

Now it’s dreams come true to have only one draw call to draw the entire backpack UI. All you need is to put the bitmap font texture and other UI texture into a single Atlas, then in the WebGL and native environment Will be automatically batch rendering.

In the above figure we use the editor’s own auto atlas function, the folder contains Sprite texture and bitmap font texture, once you build the project you can see the effect of batch rendering.

In addition, UI enhancements also include:

Extension store is now online and can be accessed from within Cocos Creator editor. The first bunch of extensions are hand made by your loyal friends at Cocos development team. To be able to browse and download extension user will need to login with their Cocos developer account when editor launches.

These two new workflows make it easier for extensions to automate the management of scenes and assets and enhance the usability of editor extension systems in common game projects. Extension store is also open to developers who wish to publish their own packages.

In the future version, we will continue to improve the editor extension system interface.

1.4 version is the first version of hot update system rework. In this stage we fixed main bugs and improve the hot update system interface to let developer customize their own behavior, the specific changes include:

Follow-up we will combine the editor to further improve the hot update workflow, including the provision of plug-ins automatically generate manifest files, and support through the editor to define the resource package, multiple manifests can be selected updates, etc., so stay tuned.

As the audio decoding program and some Andrews chip is not compatible, in order to solve some of the Android system audio playback crash, we added two software decoding third-party library respectively, corresponding to mp3 and ogg format. The use of software decoding while improving the efficiency of playing the above format audio.

VS Code debug web version of the game

VS Code is Creator’s preferred code editing tool, but before the debug version of the game can only use the built-in Chrome DevTools tool, debugging can not be real-time changes to the source code, the other browser debugging is also easy to take up too much resources to cause the card pause.

In the 1.4 version we added the VS Code debugging workflow, through the menu a key to configure debugging parameters, and improve the compiler script after the sourcemap generation logic to reduce errors. Now you can through VS Code on the web version of the game to conduct a complete debugging workflow!
Downloads:

Thanks for the hard work and release. FYI- the api is still 1.3.0? God Bless…

thanks. i need to generate a new version.

Thanks for your work!
Do you have any plans to make ability to use the Cocos Creator as editor? I mean like it was in Cocos Studio. Because I have a lot of projects where I need Cocos Creator only as UI editor.

i am not sure if we have plans. i imagine this would come later if anything. VSCode is pretty damn amazing.

This is amazing, tons of work went into this! Agree that VSCode is great!

If anything, is there a way to have Cocos Creator recompile the code whenever I save my files in VSCode? Maybe I’m overlooking something because right now, I have to manually ALT+TAB into Cocos Creator for it to auto-build every time after I save in VSCode (it starts building as soon as I change “focus” to it in Windows and macOS, but it won’t do it right away until I ALT+TAB, if that makes sense).

@TheChuckster I had the same inconvenience. I solved it with ‘preview plugin’ in the store.

It seems really good, but now I have a problem with my game in the simulator 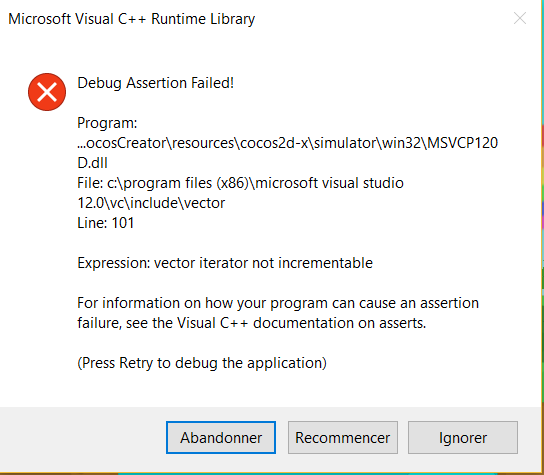 It was working before the update, and it works when I try it on the browser. It is a problem with my dragonbones fade in, don’t know why. I can use fade in, but some of them make the game crash…

Cocos Creator 1.4 looks amazing. Downloading now.
Btw, is there a U3/portable version of Cocos Creator 1.4?
Would be nice if I can put it on a USB, and start it on any machines, without having to install

Oops, looks like one of the Cocos developers tried modifying an std::vector inside a loop. Some implementations might be more permissive about this than others

I highly recommend the Cocos team use something like PVS Studio to prevent shipping releases that still have rookie mistakes like this one in their code. Hey, it happens to the best of us, and when it DOES happen, it sucks to have to try to save face, release a patch, deal with all of the frustrated users (I’ve been in this boat before, too), etc.

I’m also shocked that this code was shipped compiled in Debug mode instead of Release mode.

Nice thing about PVS Studio is that it’s free for anything open source.

^ They have my highest recommendation. John Carmack also swears by them:

John Carmack, id Software founder and technical director, tells us about his experience of using static analyzers, including our PVS-Studio, in his article "Static Code Analysis".

Oops, looks like one of the Cocos developers tried modifying an std::vector inside a loop. Some implementations might be more permissive about this than others

you sound more like an ad! where exactly is the modification inside a loop? file and line number?

Details are in @abyssal_studio 's parent post. You’ll have to do some digging.

I’ll ask someone to look into this too.

Anyone know how to focus EditBox without setStayOnTop?
In version 1.3, i use

But in new version 1.4, this isn’t working. Does anyone have suggest?

thanks. i need to generate a new version.

It was working before the update, and it works when I try it on the browser. It is a problem with my dragonbones fade in, don’t know why. I can use fade in, but some of them make the game crash…

Thanks for reporting this, can you show us how you are using the fadeIn with DB, or a simple demo will help too.

@TheChuckster thanks for the suggestion, I have feed it back to @minggo

But in new version 1.4, this isn’t working. Does anyone have suggest?

Sorry we don’t guarantee APIs of scene graph nodes and render commands, Scene Graph Editbox have been refactored, so maybe show have been removed. You can discuss your needs with @owen , I’m not sure what you are trying to do with your code

@luke2125 i will update the website Wednesday with new versions of several docs.

Hi @owen
Do you have any suggest for:

Anyone know how to focus EditBox without setStayOnTop?
In version 1.3, i use

editbox.sgNode.renderCmd.show()
But in new version 1.4, this isn’t working. Does anyone have suggest?