The technology behind games has grown exponentially since the birth of video games. Today with the creation of cloud computing, 5G networks, and faster mobile computers, the revolution to bring better 3D titles to your hands has become overwhelmingly apparent to game developers.

The Cocos engine started as a 2D game engine. In Cocos2d-x, we built the best open-source 2D engine in the world. We also tried to build 3D features upon the 2D-oriented architecture. But due to the lack of an editor and the challenge of growth on 3D features, it wasn’t very successful. That’s why we were determined to build an excellent editor tool: Cocos Creator . It was initially for 2D game development. But since 2017, we have already started to build a pure 3D engine for this tool. To push ourselves to give developers the best 3D development tool, we have re-designed the whole engine architecture and updated the editor’s core. On October 15th, 2019, we released Cocos Creator 3D , a dedicated experimental branch of China’s product. With a whole year’s effort, we have greatly improved the 3D engine architecture. We are finally merging the experimental 3D branch into the main Cocos Creator product to forge the awesome Cocos Creator 3.0, released later this year.

We have to thank some of the biggest companies in our industry for helping us test our new 3D engine so that it would be ready for the game market overseas. During last year, many games have been created with our experimental 3D branch. Let’s show you some examples to see what kind of 3D games you can create with Cocos. 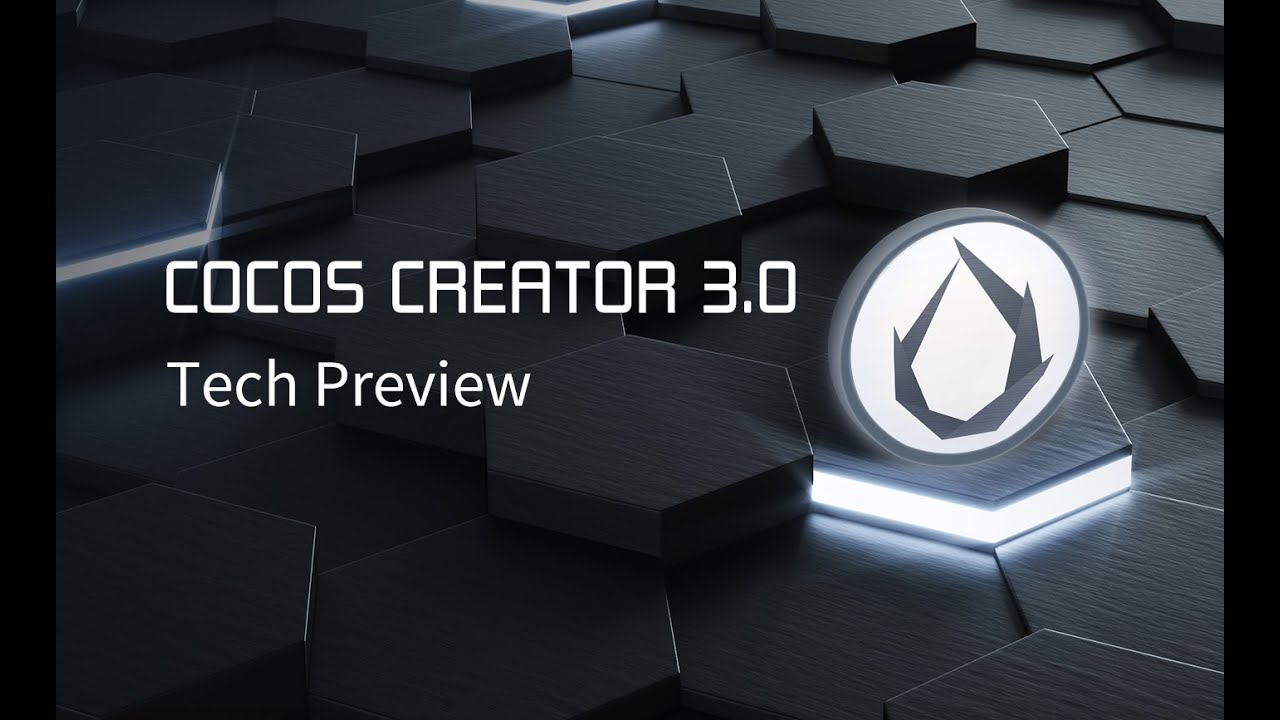 Today, we are bringing out the next generation of our game engine for you to test, prod, and investigate: Cocos Creator 3.0 Tech Preview.

Though it’s a powerful demo, this is not a complete version of Cocos Creator 3.0. But, we felt it was time to give developers all over the world a chance to see what the future will be when we release 3.0 later this year. We are excited to share a few things about what to expect and give you the chance to play with it TODAY !

You can download the Cocos Creator 3.0 Tech Preview now and start building your 3D games, fully exportable to many different platforms. There are a few things to share to make sure you have the best experience.

Cocos Creator 3.0 Tech Preview has the same look as our older versions but includes tons of 3D features. Let’s give you a glance of some key features.

Cocos Creator’s editor architecture has been upgraded to a whole next level in v3.0, I want to list a few remarkable improvements:

Besides the above architecture improvements, there are also some features introduced in v3.0.

There are a lot more to explore in our new editor, please enjoy.

While we have redesigned the whole engine, it has also been rewritten with TypeScript, this is mainly for some key features TypeScript provides and for code auto-completion in VSCode. We also suggest developers only use TypeScript in their project so that you can enjoy code completion, module auto import, API documentation, etc inside VSCode.

We also support developers build and use third party modules in JavaScript like packed npm modules as plugin scripts. Developers can define a dependency between plugin scripts.

For 3D models and animations, we support glTF 2.0 and FBX as our main asset format, we have a very solid glTF 2.0 support with all models in glTF Sample Models passed. Some main features need to be mentioned for model and animation support:

Cocos Creator 3.0 is designed for physically based rendering (a.k.a PBR).

Currently, there is support for directional light, sphere light and spot light. The light configuration is based on physical metrics: color temperature and light power. The camera is using SBS exposure with configurable aperture, iso and shutter speed. This will let you simulate a real world camera easily. And our standard materials are physically based. We have put some effort to improve the rendering process and the algorithm to run smoothly on mid to low end devices, even on web platforms. 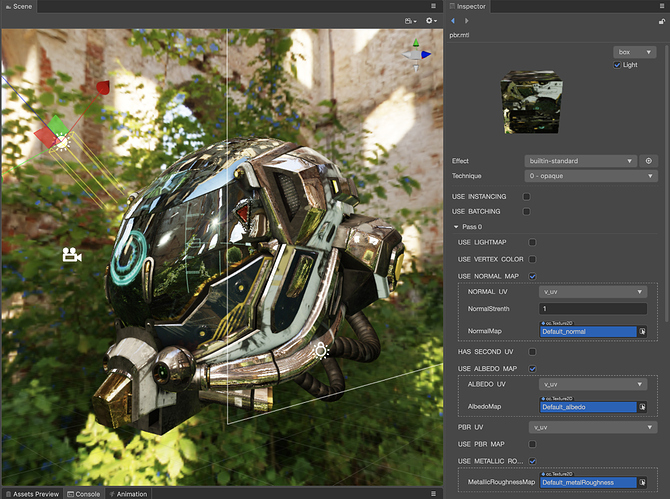 Two types of shadows are supported in the current version, one is simply a planar shadow which allows shadows only on planar surfaces, another is standard shadow map shadows with PCF support. Developers can configure it in the scene inspector.

The material system in v3.0 is the same as in v2.4, we use the same effect format but with more feature support, like GLSL 300 es support, effect preview, up to 32 macros support, visualized editing, uniform key frame animation, etc. 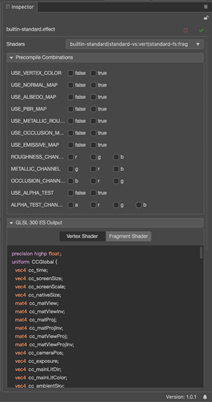 The 3D particle system was ported from 3d experimental branch to Cocos Creator v2.3.0, so you can have the same use experience as in v2.3. In the tech preview, you will be able to switch 3D particle system to GPU based simulation and have a tremendous improvement in performance.

3D physics system was also ported to v2.3.0, but the tech preview version have much more features provided. Firstly the collider types are completed, secondly, we are starting to support constraints, thirdly, more complete physics events help developers to have more control over the behavior. At lower level design, as you can see in the graph, we have decoupled the physics components and functionalities with the beneath physics engine backend, so developers can choose what’s suitable for their use case. 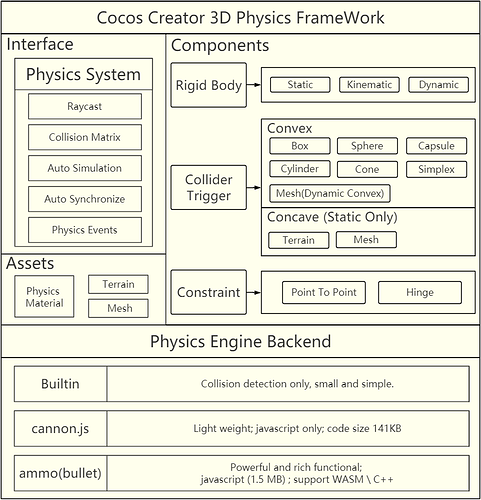 There isn’t much built-in effects provided in the tech preview, but fog is a very nice built-in effect we can share today. Depth fog and layered fog are both supported. 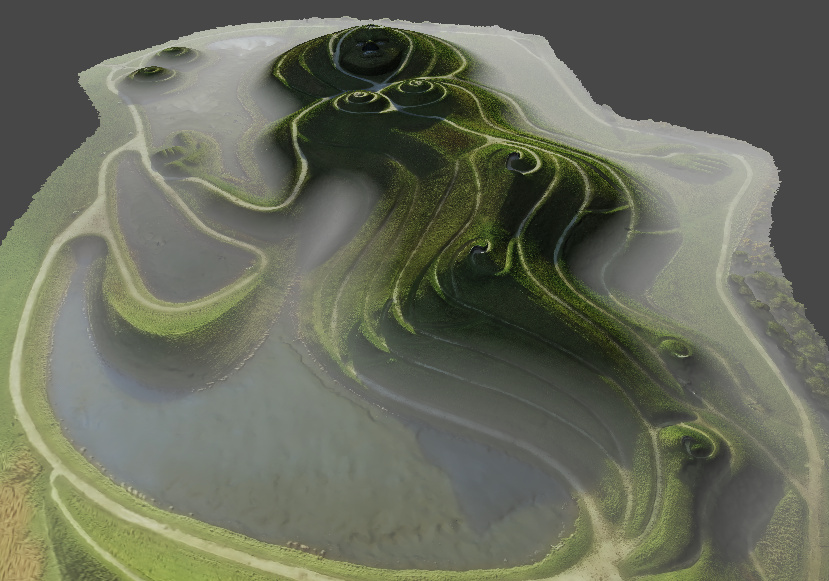 This technical preview version has a lot of great features and has inherited features from Cocos Creator v2.x, along with some fundamental changes we have to do for better 3D support. Hereare some key points:

We have finished almost all of the documentation in English for Cocos Creator 3.0, please check it out. There are hundreds of new documents we’ve been working months to translate and add for the final release of 3.0. If you find something missing, always contact us on these forums, and we’ll try to finish or fix it. Thanks for the help.

We built a few demos as well, and a full game to look at and try. All are free to play and enjoy on Github.

If you have any issues, please share them here. We want Cocos Creator 3.0 to be amazing, your support, suggestions, and bug reports help us make that happen.

Cocos Creator 3.0 is almost here, and we are super excited to share it with you in a few months. Thanks to everyone helping and giving us support for the work done to help us get here, especially the developers making games with Cocos. Pplease take a taste of what’s to come, play around and tell us what you think, and be ready for the next generation of development for Cocos Creator, a 3rd dimension for Cocos.

Thanks a lot for the update!

Unfortunately there are still bad things that must be improved (on my opinion):

In the code above every thing works perfect in the editor and inside the inspector you can notice even more detailed section of the property speed of class AnotherClass. However, when you access the timeline animation and you try to animate the property: externalProps.speed the engine shouts on you on preview and it tells you that you cannot do that. WHY? It is a must have feature. Btw, if you cannot do that so why the animation timeline shows you the ability in the first place? Maybe a design issue? Or maybe I missed something?

Any way, I am still testing whatever I can. And I find this engine to be the best web engine out there! Keep up the good work!

Moving on to have some fun with materials and lightnings

Thanks for the insightful feedbacks, I have send them to our product designer and we will create internal issues to track them.

It’s just one annoying thing for those who came from Unity that when they are coding, they expect the node.position be global, but is local, and it take some time to get used to. It’s not wrong, it’s a design choice, but it would be great if we didn’t needed that learning time.

Thanks a lot for your feedback. Here is my notes:

Thanks @Randomzord @hananht , I understand more the problem. We do support world space calculations with Node.setWorldPosition etc, and getters are provided too.

We are using local coordinates for position, scale and rotation because it’s from the design of the original cocos2d-x and cocos creator, we don’t want our old users to learn a different meaning of it. Another reason is that our node APIs are implemented in JavaScript, so the performance of world coordinates APIs is worse than local coordinates, that’s why default RTS properties (the most frequent APIs) are by default in local coordinates.

The sub property path for animation editing could be expected in v3.x, we don’t add any more feature to v3.0 in the current stage

Thank you. I will look forward for it!

hello, I test the external props in Animation Edtior, It seems working well, can you attach a screenshot of your problem?

Press play and while the game loads you will see the error in the console.

Do you mean this waring:

This is the problem of property decorator:

A small question: do we have some kind of WebGL 1.0 Fallback? It seems like i cant start stuff on older Hardware / Browsers which only have webGL 1.0. Can someone confirm. If so, it would be great to have a fallback.

Is there an example (or git repo) of a working extension?

I created an extension in Cocos Creator 2.x to run some regular expressions and file (fs) operations on builds.
I’m having difficulty recreating it in 3.x (following extension documentation).

Hello, thank you so much for the update! Perhaps I missed something in the documentation. But I haven’t found a good way to rotate the camera around an object. This can be achieved by changing the center of rotation of the camera (like the center of mass in physics).

What trouble are you having?

When I preview the game with the browser, it runs flawlessly. When I preview the game in the engine, everything becomes super laggy, less than 10fps. My PC isn’t the issue, I have a rx570 GPU, i3-8100 CPU and 8GB RAM thingie that runs every other engine perfectly. I think the scene view getting updated in real time along with the game may be causing that lag.

Also, when I import my .fbx file materials slots get duplicated. Actually, half of the mesh uses a material slot and the other half uses another slot.

The .fbx file is perfectly exported. In fact, it works correctly in Unreal and Unity.

Finally, how do I build my project for Windows and Android?
All I get after building is a bunch of folders and files, but there isn’t an android studio project or anything I can use to build an .apk. I can’t find docs for this. 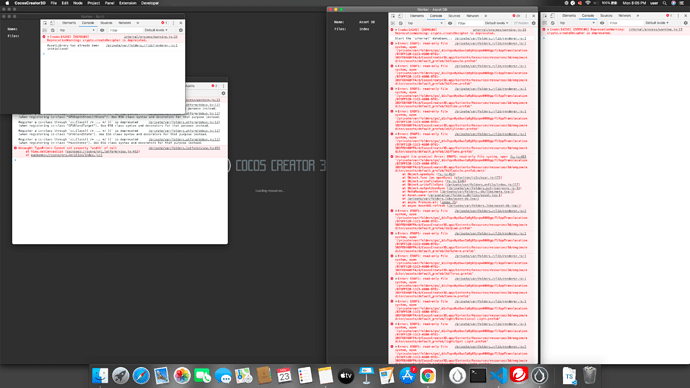 Unable to open engine .
Stuck after a project create/open.

@shishir451 where are you launching Creator 3D from? There are a number of warnings about a read-only filesystem.

@slackmoehrle downloaded the above zip and tried extracting to different locations but still the same errors.