Here are some concepts I need to first introduce to you:

In Cocos Creator, we can see the current number of DrawCalls through debugging parameters.

The performance overhead caused by DrawCall is mainly in the command assembly on the CPU side. The more DrawCalls, the more commands need to be assembled, and the more CPU resources are consumed. Especially for low-end computers and iOS devices that cannot JIT, DrawCall has a great impact on performance.

After the above analysis, it is not difficult to conclude that batching objects together for rendering as much as possible (reducing the number of DrawCalls) plays a very important role in rendering optimization.

First, let’s look at a concept referred to as “can be batched.” We call objects that use the same material and a batchable rendering component (such as MeshRenderer) “batchable.” The objects to be batched must first meet the conditions of “can be batched”.

Static batching is to re-merge the meshes that can be batched objects in advance to generate a large new mesh according to its position and then draw it. Since these objects meet the batching conditions, they are all the same shader, so to render these objects, as long as the new merged mesh object is submitted to the GPU at one time, the batching of these objects can be displayed, and the DrawCall can be reduced.

But static batching also has its disadvantages:

First of all, the word “may” means that it will increase in some cases, and it will not increase in some cases. Imagine that if 100 objects are entirely different, then the memory overhead of the merged Mesh vertices is the same as before the merge. Still, if the Mesh of 100 objects is precisely the same, there will be 100 different Meshes after the merge. If the vertex data of the position is removed, this merging will increase the memory overhead. Therefore, in actual game development, we do not use static batching when doing scenes like forests (with many identical trees).

Dynamic batching means that before each rendering, the CPU calculates the world coordinates of each vertex of the objects that can be batched (model vertex coordinates * world change matrix) and submits it to the GPU, and then the world matrix uses the unit matrix to come to achieve a batch effect. Dynamic batching is suitable for moving objects without incurring additional memory overhead.

However, because the CPU has to recalculate the coordinates before each rendering, dynamic batching will increase the burden on the CPU. In actual use, a trade-off should be made between the additional overhead of the CPU and the improvement brought by batching. Therefore, dynamic batching is not a panacea, and it is not suitable for rendering objects with too many vertices.

For N instances of the same object in the game scene, the GPU Instancing batching technology can be used. Its principle is to submit the model of the object once and then submit the instance’s position, rotation, scaling, and other information to the GPU, and then the GPU draws N instances.

From a technical point of view, GPU Instancing is an excellent batching method, which brings almost no additional overhead. However, GPU Instancing requires Shader support, and some early graphics cards do not support GPU Instancing features.

After understanding the principles and advantages, and disadvantages of several batching technologies, you can consider using the corresponding batching technology for batching. But before that, there are two critical points before us:

How can you determine how many DrawCalls are consumed by drawing a specific object? Generally, we will judge the analysis estimate by the organization of the scene and confirm our analysis by showing/hiding objects to see the change in the number of DrawCalls. As shown in the following example, after the character is hidden, the DrawCall changes from 7 to 4, indicating that the character drawing takes 3 DrawCalls. 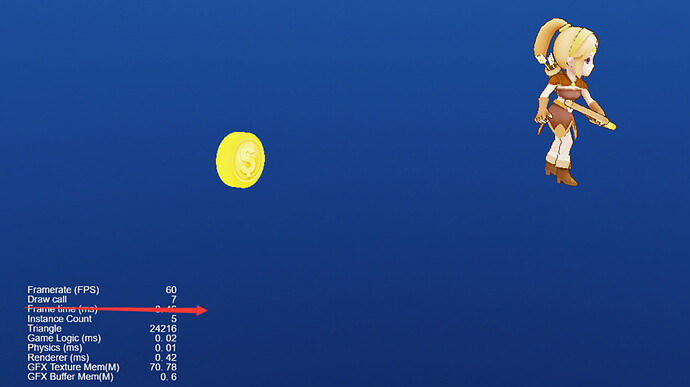 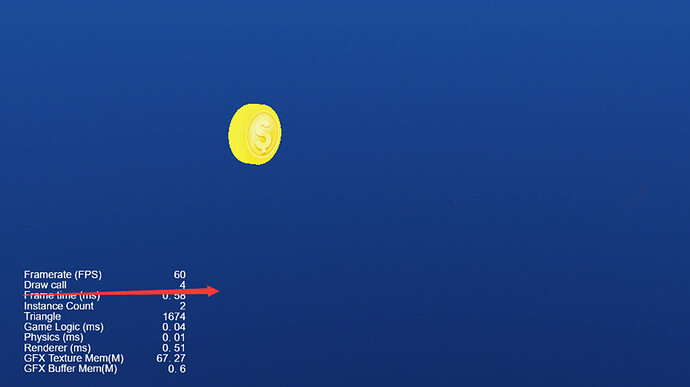 To make it possible for more objects to be merged, I usually take to merge the shaders of multiple objects as much as possible. The shader mainly contains Shader+texture. We should use the same shader for as many objects as possible and then combine the textures of different objects together so that these objects use the same shader. In addition, it is necessary to change the rendering component type to allow more objects to meet the rendering components supported by the batch, such as changing the SkinnedMeshRenderer component into a MeshRenderer component.

After knowing the distribution of DrawCall and creating the conditions for batching as much as possible, let’s look at how to implement these batching technologies in Cocos Creator 3.x.

Put the objects that need to be statically batched under a node, call the static batching API interface in the initialization interface, and pre-calculate the newly batched objects to achieve batching.

Take the following example “1 cone + 1 cube.” First, pre-calculate the new Mesh of all objects under the node during initialization. It can be seen that 2 DrawCalls are required before static batching is turned on, and only 1 DrawCall is required after turning on, saving 1 DrawCall. 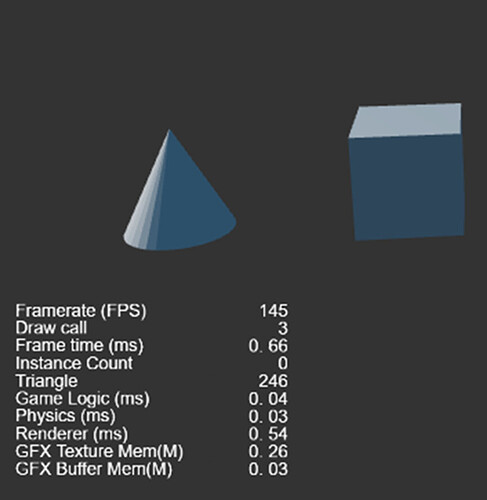 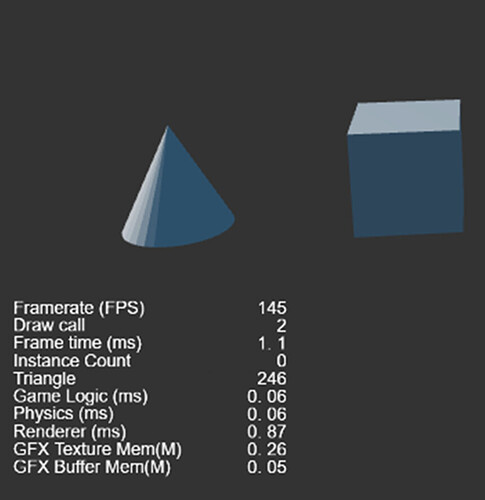 Dynamic batching only needs to check USE BATCHING on the shader: 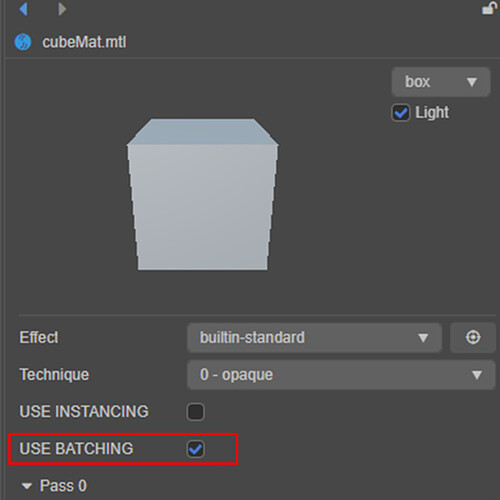 The same is true for GPU Instancing batching. Just check USE INSTANCING on the shader:

However, since GPU Instancing is only useful for multiple instances of a Mesh, there are still 3 DrawCalls acting on "1 cone + 1 cube ", but if it is “2 cubes”, it will be merged into 1 DrawCall after GPU Instancing is turned on. 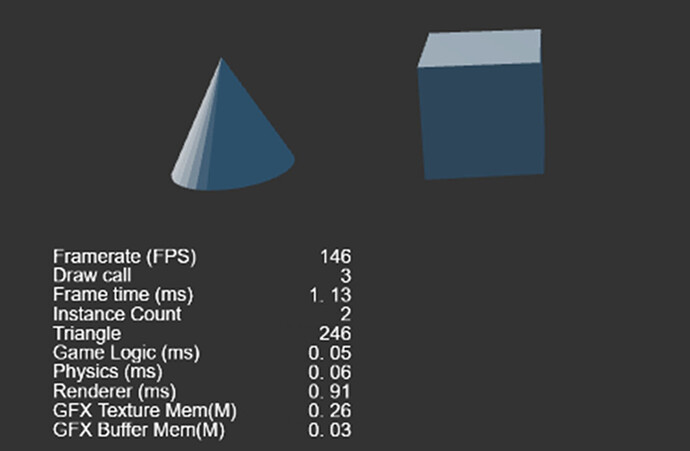 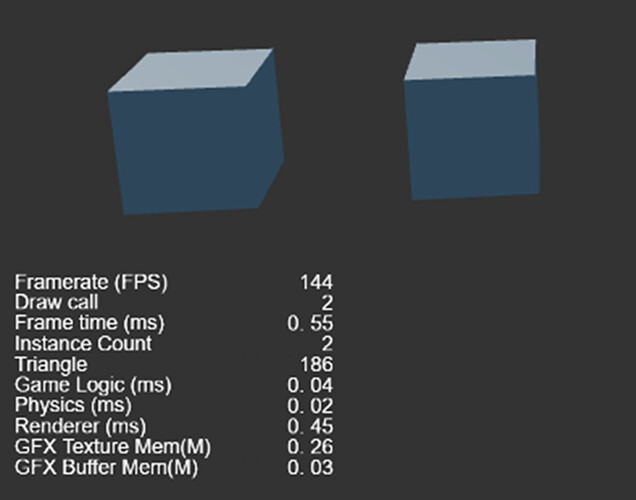 2D is a special kind of 3D, so the batching method of the above 3D part is also applicable to 2D.

As for the Label batch, the engine will automatically generate it, which can be understood that the Label batch and the sprite batch are not the same batch. If the text cache mode is enabled, several different Label texts may be generated by the engine to the same set.

The core of 2D UI DrawCall optimization is 3 points:

Today’s sharing is here, I hope it can be helpful to everyone! You are welcome to the forum to discuss and exchange idesas together at: 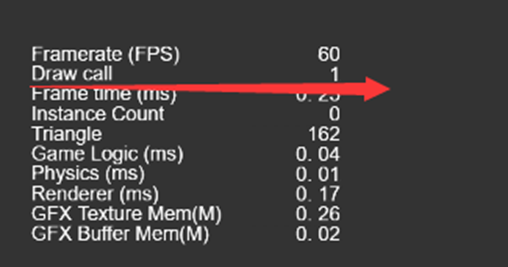