An Introduction To Changing Costumes With Spine

In 2D/3D games, animating clothing is a common requirement. In 2D games, Spine is a powerful and widely used skeletal animation tool, so Spine skins is a topic that many developers cannot avoid. According to Feather’s understanding, according to the needs and implementation methods, the clothing can be divided into:

The specific choice of which scheme is more appropriate needs to be comprehensively considered from the aspects of the programmer and art maintenance convenience, performance bottlenecks, project requirements, etc.

First, based on Cocos Creator 3.5.2, Feather will introduce their pros and cons, selection, implementation methods, and pitfall avoidance process of various schemes in this article.

Secondly, in the implementation process, it is also necessary to consider the differences between the web and native platforms for adaptation. Feather will also share with you the difficulties and solutions encountered during the adaptation process on different platforms (web, mini-games, native).

Spine is an implementation of 2D skeletal animation, similar to DragonBone. Spine allows you to design bone motion, keyframe motion, and skinning information at runtime. Spine will automatically calculate the data between keyframes from the bone drive slot and slot drive attachment (and important attachment information is mapped) to move, rotate, display, deform, etc.

As for the hanging point, it is understood that a bone is chosen as hanging point A, and hanging point A is the parent of node B in Cocos, which will change as A moves, rotates, etc. (these properties are known, for now, more properties are uncertain, check the documentation, read the engine source code and test to verify if the documentation does not specify). Hang points are often used for weapon changes or local changes that can be done using hang points when external mapping is not readily available. 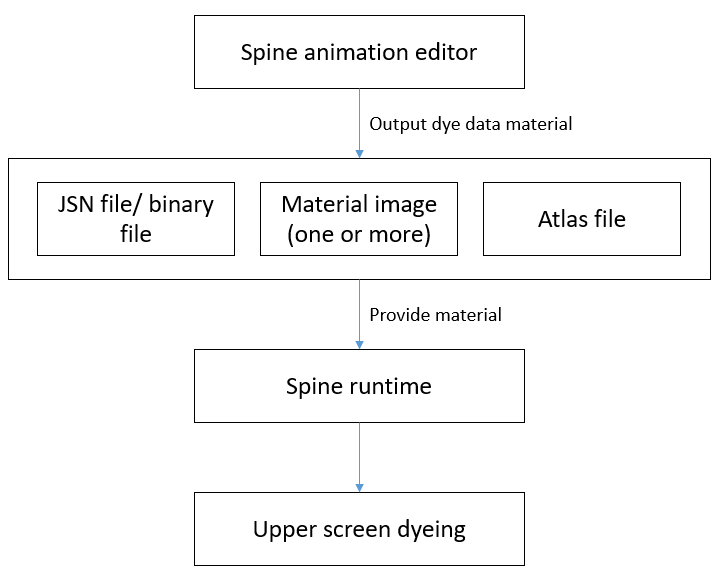 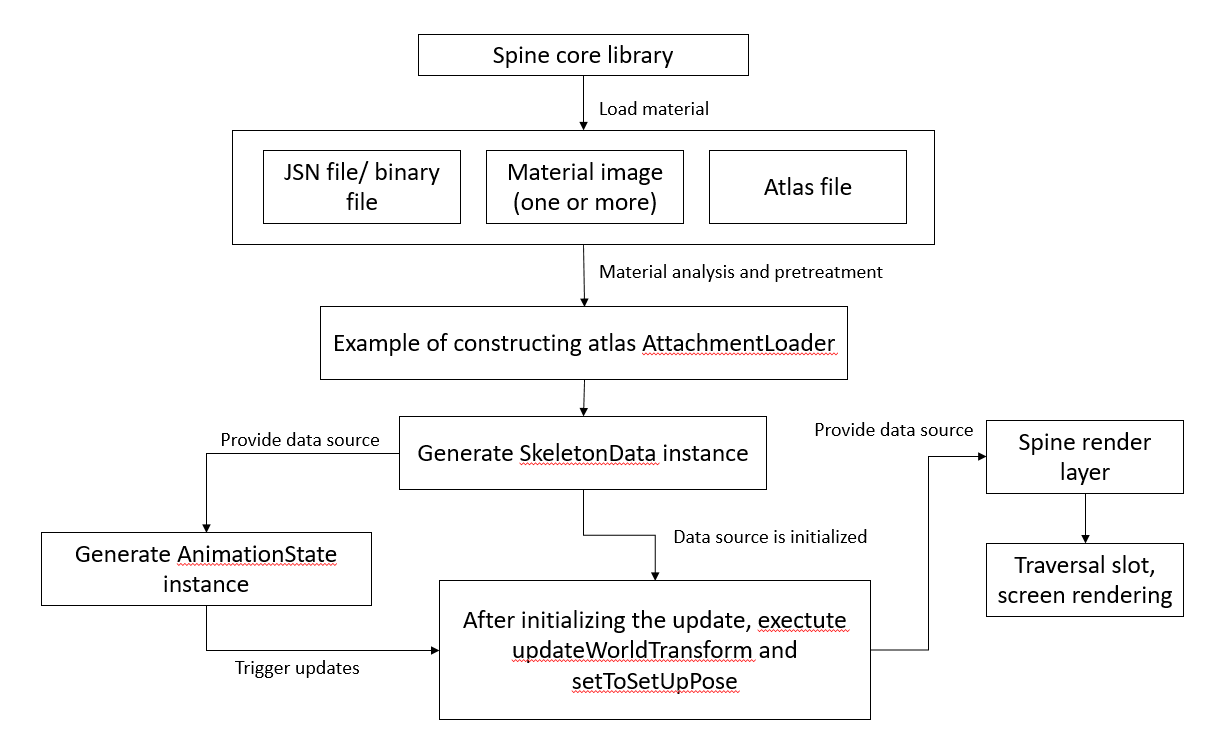 The implementation is relatively simple—there is no need to modify the engine, and the three ends are unified. After setting up the skin in the Spine editing software, you can call the API based on the runtime library at runtime. The integration of the runtime library Cocos Creator has also been completed for us. The supported versions are as follows. Developers who need to upgrade it for themselves can also download and replace it from the official Spine repository. 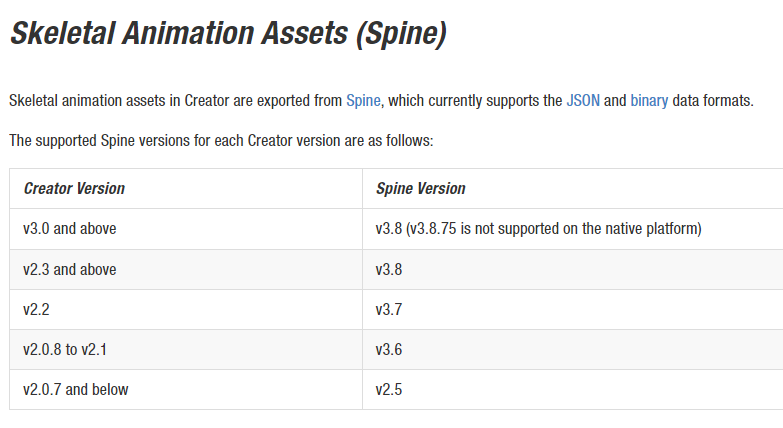 Unable to meet the needs of local skin changing, if there are m parts that need partial skin changing, and each piece has n types of skin, and the skin is switched by naming combination to achieve partial skin changing, complete skins of mxn are required to complete coverage. For all skins, when m and n are a little large, the maintenance for all combinations will be very troublesome, and the cost will be high. At the same time, with the increase of m and n, the size of the atlas will be uncontrolled, which will consume memory and slow down loading speeds.

Therefore, the overall skin reskinning is more suitable for situations where only the entire skin needs to be changed or only two or three skins combined in two or three parts. 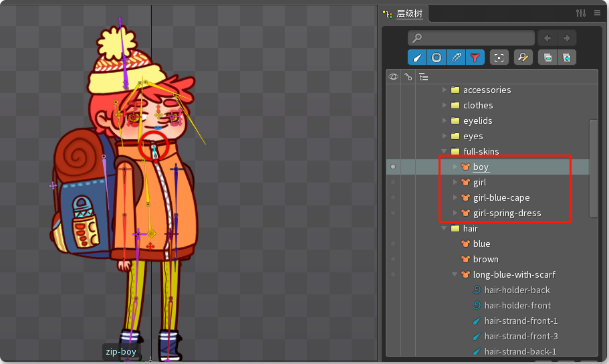 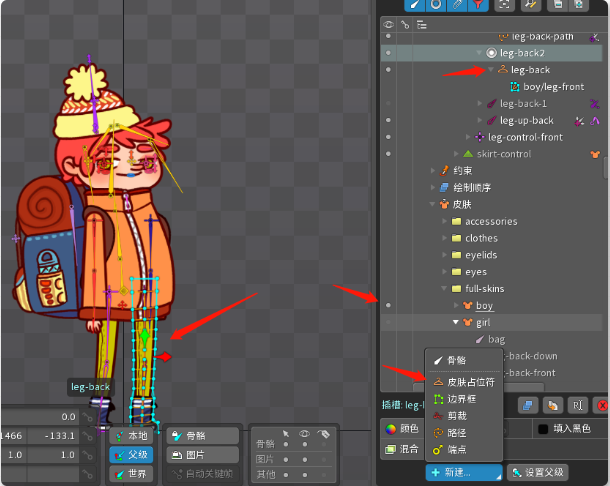 At the same time, the overall implementation of the dressing can also refer to the official introduction documentation, also written in great detail via the Spine Skeleton component reference. 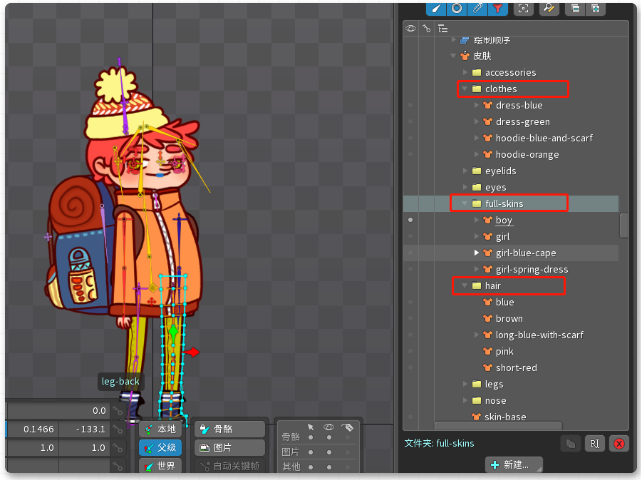 Partial skinning - External textures, as the name implies, do not use Spine to export the textures in the atlas but use Cocos Creator’s texture resources for partial skinning. The image used in the current part and the image to be replaced have no skin deformation, or the two images can use the same skin, and the external image can be directly used for dressing.

Even with the above shortcomings, in scenarios that do require a lot of smaller dressings, the partial dressing scheme using external textures is still worth considering.

The official technical team of Cocos provides a partial skinning scheme for external textures based on Cocos Creator 3.4.2. The git address is as follows: 3.4.0 Spine partial skinning. The project satisfies the adaptation for the web (including mini games) and the native side and can be downloaded and used.

Due to the change in the initialization process, the binding method provided by the official demo cannot operate normally. The adaptation used by feathers of v3.5.1 and v3.5.2 has been completed. At the same time, considering the convenience of daily project development, the TypeScript layer interface has been encapsulated to complete the demo. A link will also be released at the end of the article, everyone is welcome to download it, and if possible, it will also be on the Cocos Store.

When multiple instances of the same Spine resource exist in the scene, after one instance is replaced, the other instances will also change simultaneously, which is not expected.

For each Spine instance, copy SkeletonData. The code is as follows:

When using skeletal animation, it is often necessary to mount a node on a specific part of the skeletal animation to achieve the effect of linkage between the node and the skeletal animation. The linkage here is basically summarized as following the movement, rotation, and other attributes of the mount point to synchronize (temporarily known to have these attributes, more attributes are uncertain, the documents can be queried, and the documents can be tested and verified) to change.
The design of the hanging point is generally used for following items such as weapons. Still, from another point of view, if the project requirements do not care about some problems caused by the hanging point, it can also be used to solve some dress-up problems, so Feather thinks the hanging point is also one of the schemes for a partial replacement.

The implementation of the hanging point, this part of the official document, is also introduced in more detail. You can observe it. Here is a simple summary, taking the logo node that needs to be mounted as an example:

Be careful! Points to note:

Since a mounted node can only be a child of a Spine, the rendering order of the mounted node can only be at the top of the Spine node. However, if you don’t care too much about the order of a frame, here’s a cheeky way to make the rendering order of the mounted node logo below the Spine node. Instead of having the logo point as a child of the target, we can place it at the lower level of the Spine and then get the position and rotation properties of the target node in the update to refresh it.

However, this still does not solve the problem that the logo node cannot be rendered in mixed order with other attachments in Spine. I’m too busy to look into how to fix this for now. If any developers have a better solution to this problem, please feel free to discuss it.

No matter which plan is adopted, Spine assets plans must be fully communicated with art developers, aligned with the information, and then determined. Feather understands Spine engineering because he owns the Spine professional version and has done some simple Spine animations before, which will significantly help Spine’s subsequent development and communication.

Skins allow a skeleton's animations to be reused with different sets of attachments.