Navigation Mesh (NavMesh for short) can store the mesh information of the walkable area to realize functions such as navigation and pathfinding in complex 3D space. 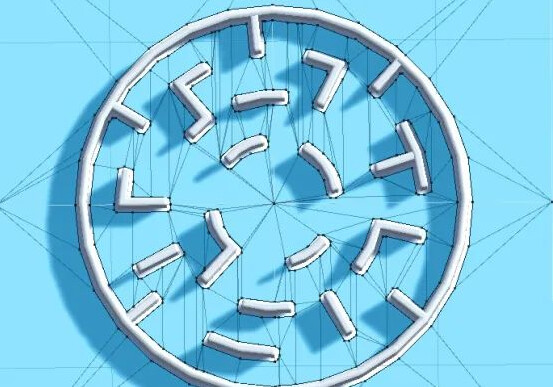 The navigation mesh comprises multiple polygon meshes (Polygon Mesh, from now on, referred to as poly), which is the light blue color block with black stroke in the above image. The pathfinding in the navigation grid is based on poly. Two points in the same poly can be reached in a straight line, ignoring the terrain height; if the two points are located in different Polys, the pathfinding algorithm will be used. (such as A* algorithm) Calculate the poly that needs to be passed, and then calculate the specific path.

Why choose to use NavMesh instead of waypoints for pathfinding?

In early 3D games, waypoints were a common way to find ways, but waypoints are not only cumbersome to generate and configure but also have a more severe disadvantage. Take the corner of Stormwind City in World of Warcraft below as an example. The AI’s behavior is limited when using waypoints and can only move on the lines between the waypoints.

And Navmesh can bake out NavMesh information by calculating the character’s information (volume, walking height, uphill angle, etc.). The light blue poly in the figure below represents the walkable area on the map.

With Navmesh, the movement area of ​​the characters will be more flexible, enabling more complex AI behaviors. As shown in the picture below, characters can fish anywhere along the river, hide in the woods, or go out of the city.

To give another more convincing example, on Harlan Island in Nagrand in the vanilla server of World of Warcraft, the use of NavMesh can cover the entire area. The behavior and performance of AI will also be more intelligent than waypoints, which can basically cover all corners of Orchid Island (of course, there are some special cases, such as jumping, etc., we can still achieve it through waypoints). 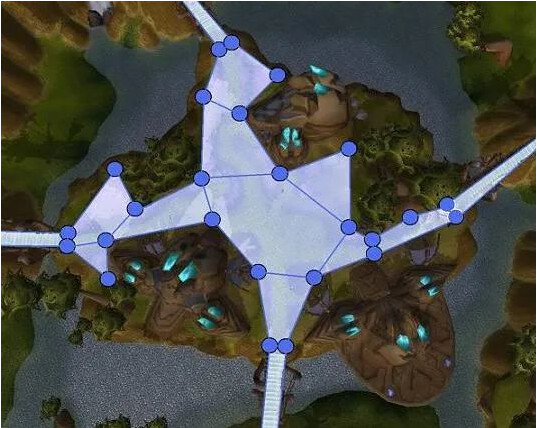 At the same time, NavMesh can also realize the slope movement of the character through height parameters and angle parameters and perform behaviors such as upper and lower bridges. Take Shattrath City in “Warcraft” as an example. Refer to the Poly part of the figure below.

Once these Poly grids are available, the pathfinding function can be implemented with the help of the A* algorithm. The open-source library of A* by bgrins is used here, and the mathematical library is translated, modified, and converted to the TS version.

The traditional A* route search is based on a grid and a grid of obstacle points in the grid for the pathfinding algorithm, as shown in the figure below.

The traditional A* route search method is based on the grid and the grid of obstacle points in the grid, and the pathfinding algorithm is performed, as shown in the following figure. 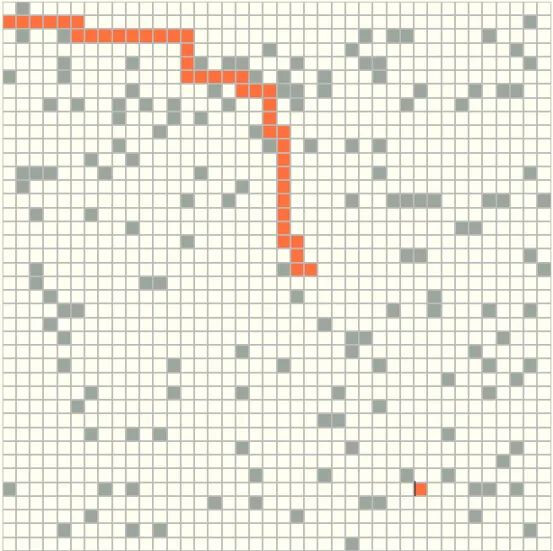 In the Poly block generated by NavMesh, the data has been meshed based on the map. We need to consider how to find the optimal landing point instead of letting the characters move along the yellow line of the poly in the figure below or directly From start to finish? 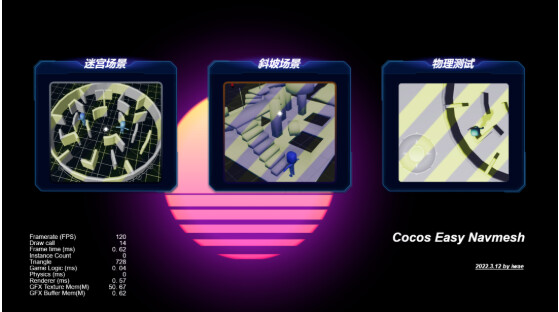 Easy NavMesh is a lightweight mesh navigation library for Cocos Creator 3.x. It adopts the A*+ funnel algorithm. The entire library is less than 40KB, which can meet the requirements of the H5/mini game platform for package size and performance consumption requirements. At the same time, the pre-baked NavMesh mesh information is saved in JSON format to ensure loading and running efficiency.

Easy NavMesh adopts the lightweight TS library based on PatrolJS, using the combination of recast.js+wasm, and controls the size of the library below 40KB. PatrolJs combines a relatively simple funnel algorithm (Simple Stupid Funnel Method) + A*, and the funnel algorithm can solve the Poly movement problem we encountered in the previous section.

The funnel algorithm abandons finding the midpoint of the edge of the poly (although this method can make the path smoother). However, through a circular algorithm, constantly reducing the scope of the triangle funnel (which can be interpreted as the angle of the triangle), this method is more frequently calculated but more straightforward and more effective.

Next, we will demonstrate the process of locating the waypoint by calculating the small funnel angle through the funnel algorithm through several example diagrams. 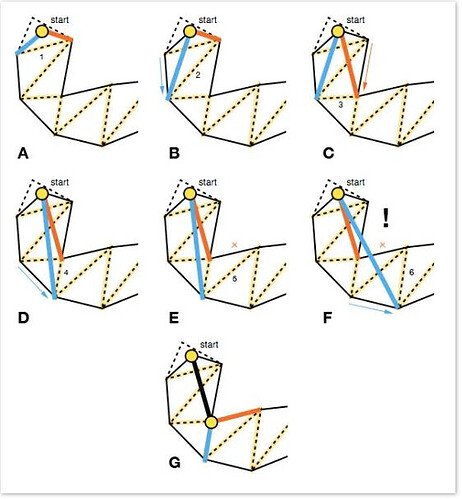 Easy NavMesh uses a pre-baking solution to export Navmesh data in JSON format in advance to reduce data overhead, which is convenient for cross-platform support.

After the engine parses these JSONs, we can use the fixed-point information and surface information in the JSONs to construct the navigation mesh data. This grid information can also be stored on the server or by creating new objects through scripts for flexible adaptation.

ClampSteped-based movement is supported. With ClampSteped, you can use the mesh information baked by NavMesh without using the Cannon or Ammo physics engine that comes with Cocos, and the characters do not need to add rigid bodies. It is based on the mathematical method of ThreeJs’ Plane and Triangle libraries (Easy NavMesh transplanted ThreeJS The Plane and Triangle classes, recompiled using Cocos’ Vec3 Mat4 math library).

ClampSteped is still an immature solution at present. Now only the basic demo is provided. Subsequent optimization needs to rely on the big guys. When using ClampSteped to replace objects, you need to pay attention to setting the object’s radius. 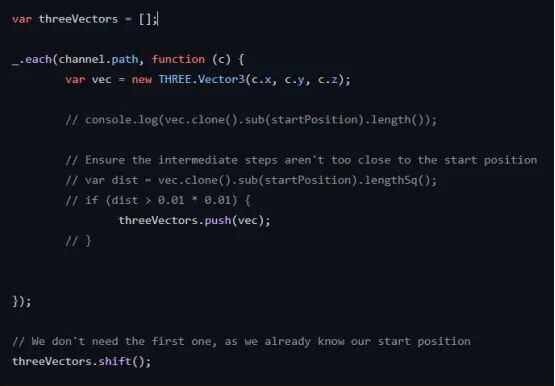 The original library uses the OBJ format or the JSON model of Three.js. Here, the JSON information can be exported directly through Cocos. The information has been reserved with decimal precision in advance, which reduces the size of the JSON and the amount of computation required to process the OBJ information. Size Does Matter ~

Q1: Why sometimes is the path not the closest visually?

A: In NavMesh, the A* algorithm uses poly as the grid. In complex grid terrain, the number of Poly groups to the nearest distance point may be more significant.

Q2: Why is ClampStep easy to pass through walls?

A: At present, the math libraries are all translated from Three.js. This ClampStep is rarely used in Three’s projects. There are not many Demos for reference. It needs to be further adapted to Cocos, and subsequent versions will continue to be tuned.

Q3: Is there a follow-up optimization plan?

A: Easy NavMesh will continue to be updated and maintained. First, I plan to add more NavMesh-based game demos, such as hide and seek, optimizing ClampSteped, and implementing ClampSteped-based FPS NavMesh Demo (next time!).

Easy NavMesh has now been released. Click at the end of the article to get it in the Cocos Store. Thanks for your support. See the Chinese forum for more detailed instructions, and welcome everyone to exchange feedback in the post! 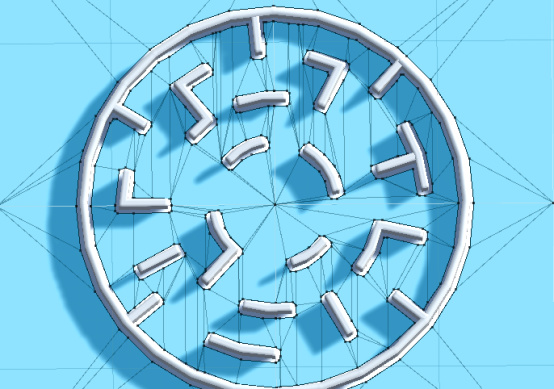